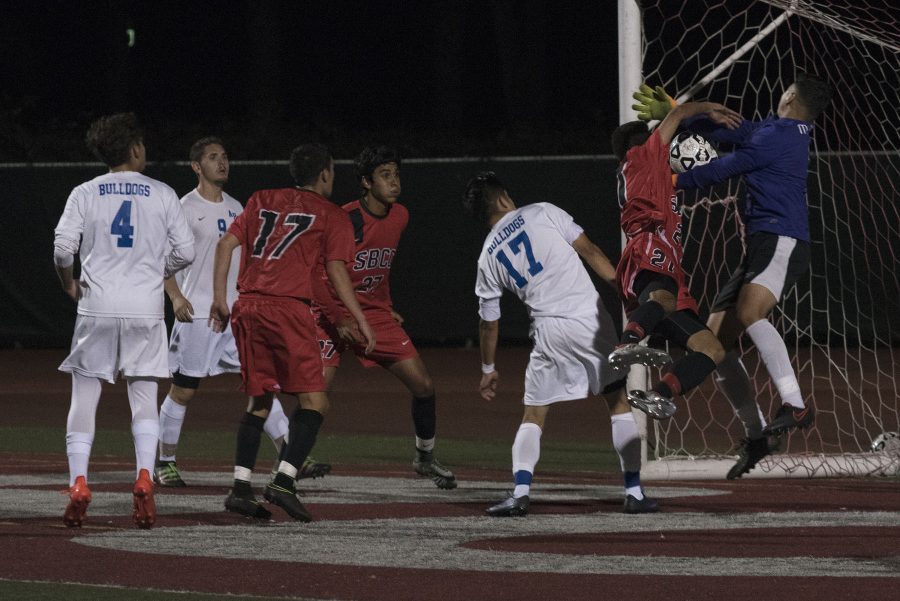 “We needed to get back on track,” said Sisterson. “It was something we had to do.”

Starting from the opening whistle, both the Vaqueros and Bulldogs set the tone for how physical the match would be. Throughout the first half the head referee warned both teams for their aggressive play.

The Bulldogs almost took an early advantage when sophomore forward Bernardo Rubio crushed a shot from 20 yards out but Shane Pitcock, City College sophomore goalkeeper, was able to punch it out over the top of the goalpost.

As a result of the physical first half, neither the Vaqueros nor the Bulldogs could find the back of the net and the half ended 0-0.

Victor Chavez, City College freshman forward, ended the drought in the 56th minute when he ripped a shot past Allan Hancock keeper Elijah Herrera from the top of the penalty box.

The goal came off an assist from City College forward Callum Challinor.

“After this win it’s good to get back,” Challinor said. “We obviously know that we can win and that we can keep on winning. We just have to show confidence as a team.”

“It’s been nine games and only making one goal as a forward is sad,” Chavez said. “But at the same time scoring the game winners is pretty cool too.”

Chavez is now tied with freshman midfielder Carlos Espinoza for the second most scored goals this season at three a piece, freshman forward Kevin Kwizera leads the team with five.

“It’s a competitive conference,” Sisterson said. “But I think we’ve got a squad good enough and a squad big enough to ride the storm and win the conference.”

City College will travel to Oxnard to face the Condors at 4 p.m. Friday.