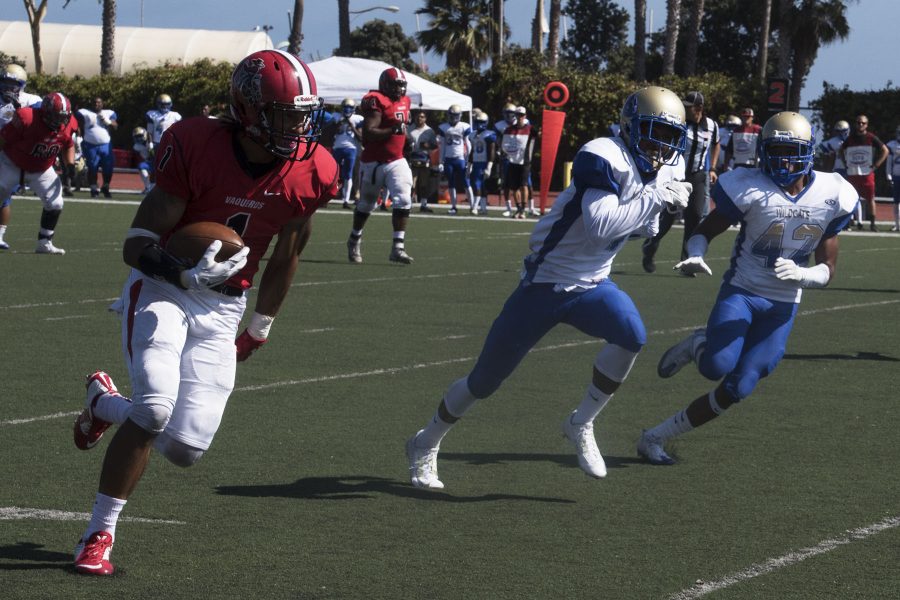 Tall and lanky, quiet and reserved—Elijah Cunningham doesn’t talk much. But on the field his athleticism and leadership speak volumes.

“He’s a leader on the team. He’s one of the captains,” said teammate Jason-Matthew Sharsh. “We all pretty much look up to him.”

Elijah, an explosive receiver and kick and punt-return specialist, has football running through his DNA.

His uncle, Randall Cunningham, is a Philadelphia Eagles Hall of Famer, pro-bowler and two-time MVP. He was also Elijah’s biggest role model growing up.

Elijah’s oldest uncle, Sam Cunningham, also spent his entire career playing for the New England Patriots, and in 2010 was inducted into the Patriots Hall of Fame.

Both of his uncles have played at the highest level of football, and it comes as no surprise that he followed in their footsteps.

Elijah was born in Carpinteria in the summer of 1996, later moving about 200 miles north to the small city of Woodlake, between Fresno and Bakersfield, to finish high school.

His football trek began when he was in the fourth or fifth grade when he played on his first team, the Carpinteria Indians, in the Youth Football League division.

While playing football at Woodlake High School, Elijah went on to be named all-county utility player for his standout kick and punt-returning ability, and also earned first-team and all-league honors.

Given Elijah’s talent in all of his respective positions, he says he’s best at returning kickoffs and punts.

“I’ve always done it since I was a little kid,” he said. “Just returning punts and kicks.”

When it was time to make a decision on where he wanted to take his talents, he said City College was an easy pick.

“It seemed cool coming back over here. Especially coming from the valley, where it’s 105 degrees all the time,” Elijah said.

In just his first season playing for the Vaqueros, Elijah managed to accumulate over 700 all-purpose yards, leading him to become the No. 1 ranked kick returner for the California Community Colleges.

This season is much more special to Elijah and the rest of his teammates. Unlike past seasons at the City College, this year they want to leave their mark as the best football team in the college’s history; and they are off to a great start.

“Last year we had way more athletes, I think, personally. But we didn’t have no chemistry,” Elijah said. “It was just every individual trying to do their own thing. This year there’s a team bond. You can feel it.”

Although the team has great players, Elijah cites the teams chemistry and coaching as the ultimate driving force behind the group’s impressive season.

“Coach expects the best from each one of us,” he said. “If I drop a ball he’ll be mad at me because he knows I can catch that ball.”

The team has their eyes set on a winning a bowl game, and some players, including Elijah, hope to land an opportunity playing for a Division I football program.

If he comes up short on a career playing football, Elijah still always wants it to be apart of his life, he said.

“I’ve thought about coaching and training people and stuff like that,” he said. “I really like helping people do good.”

He plans to take football as far as he can. His short-term goal is to transfer to a Division I program and eventually take a shot at the big leagues, like his two uncles did.

Elijah’s long-term goal is to cement the Cunningham dynasty in the world of football and continue on with the family legacy.