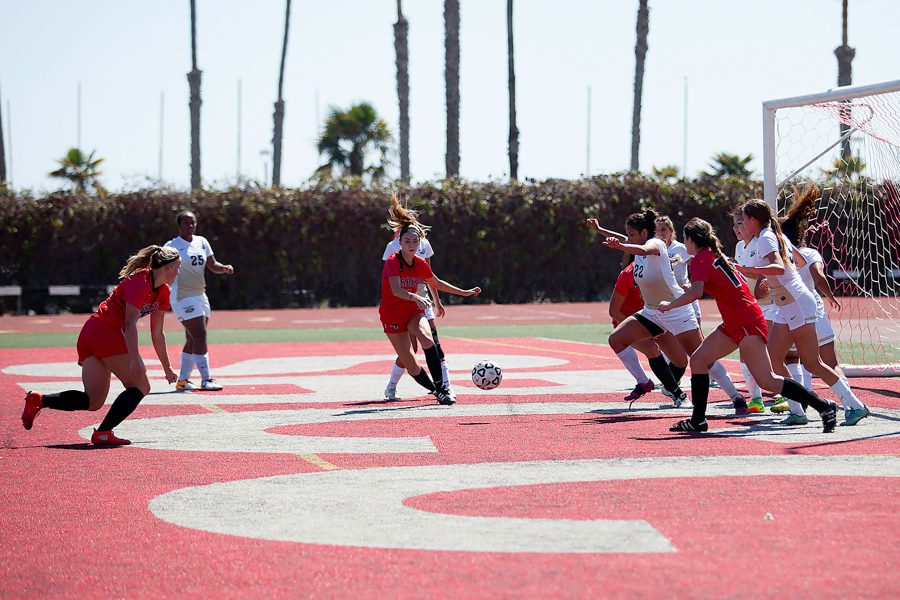 Josefine Von Der Burg (No.12) scores against West Hills College in the second half on Friday Sept. 23, La Playa Stadium. The Vaqueros won 5-0.

Multiple efforts from the Vaqueros offense late in the first half rocked West Hills but didn’t show results for the home team.

Chloe Montano, a sophomore midfielder known for her accurate corner kicks said, “we knew we were the better team, we just had to prove it. We just came off a loss against Chaffey so we needed to win to get our confidence back.”

Both teams opened up the second half battling for the ball to get past midfield in their favor.

It wasn’t until the 59th minute when a clearance from West Hill’s defender, Marlena Miller resulted in a corner kick taken by none other than Montano that was shot into goal by Isabelle Wuethrich.

“Our coaches motivated us and fired us up during halftime,” said Vaqueros forward Blayne Shoffit.

“Chloe is that kind of midfielder I have missed, she understands the game and finds me in the right spot,” said Van Der Burg.

Von Der Burg continued her scoring streak when she out-ran two of Lemoore’s defenders and took the opportunity put the ball past the goalkeeper.

The away team’s defense was barely clearing the ball now and showing weariness, leaving the Vaqueros’ keeper Alejandra Camarillo to calmly talk to teammates.

Sheehy got in on the action from an assist by Von Der Burg at the 75th minute and then returned the favor with back-heel touch back to Von Der Burg seconds later.

The Swedish sophomore sealed the game with a hat-trick, scoring three of the team’s five points.

“I think we connect really good as a team,” said Von Der Burg. “We have a really good team this year.”

City College will play the Canyons next Tuesday in Santa Clarita.