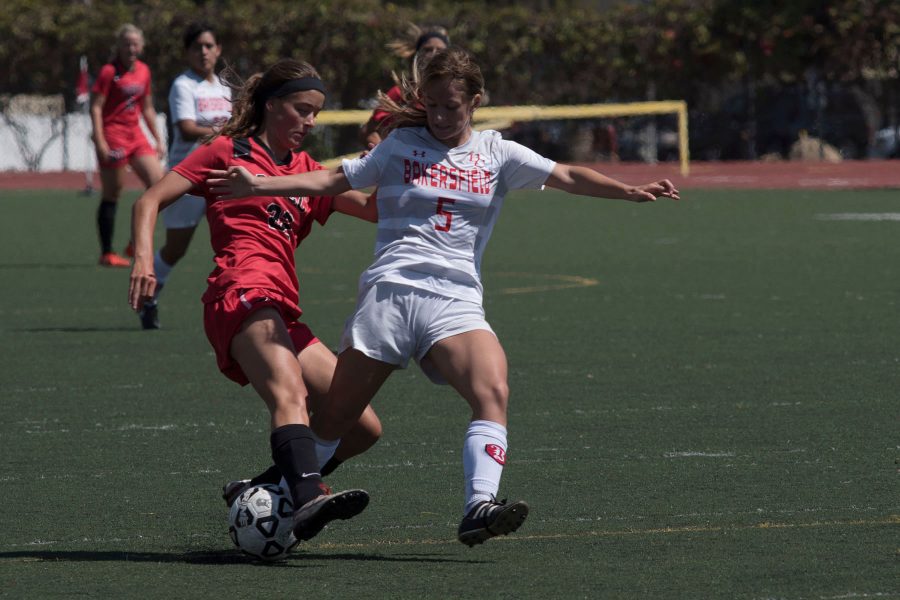 Freshman Chloe Montano opened up the scoreboard at La Playa Stadium in the 9th minute with a free kick that went to the top right corner of the goal.

City College and Bakersfield found themselves going back and forth until the away team found the back of net in the 14th minute.

Montano and Swedish sophomore, Josephine Van Der Berg, shined on the field as it was their second game scoring two goals each.

“They’re both great players,” sophomore midfielder Abigail Guillen said. “We can always rely on them to score.”

Moments before the halftime whistle blew, the Vaqueros were given a corner kick taken by Montano. Bakersfield’s keeper couldn’t keep her grip on the ball and Van Der Berg snuck it in with a shot that bounced off her shoulder.

The two teams found themselves neck-to-neck at the beginning of the second half, but the Renegades slowly lost their offensive tempo and couldn’t get the ball past midfield.

The Renegades found one dangerous play that was easily defended by the Vaquero’s defense. Bakersfield failed to be aggressive on offense and retreated to playing defense for the remainder of the match.

“We’ve got players that can keep the ball as well,” Sisterson said. “The girls are starting to really improve and pass the ball and when we go forward we do look dangerous.”

The match’s referee made a questionable call in the 63rd minute as one of Santa Barbara’s goals  was annulled for a supposed offsides, sparking confusion within the crowd and frustration from the coaching staff.

Approaching the 80th minute, Vaquero Katherine Shehy was tackled by the last defender in the penalty box, opening up a scoring opportunity with a penalty kick.
“Katherine up top is so quick, she poses a threat to everyone,” Sisterson said.

The women’s soccer team will be back home at noon on Friday, Sept. 23, to play against West Hills Lemoore.