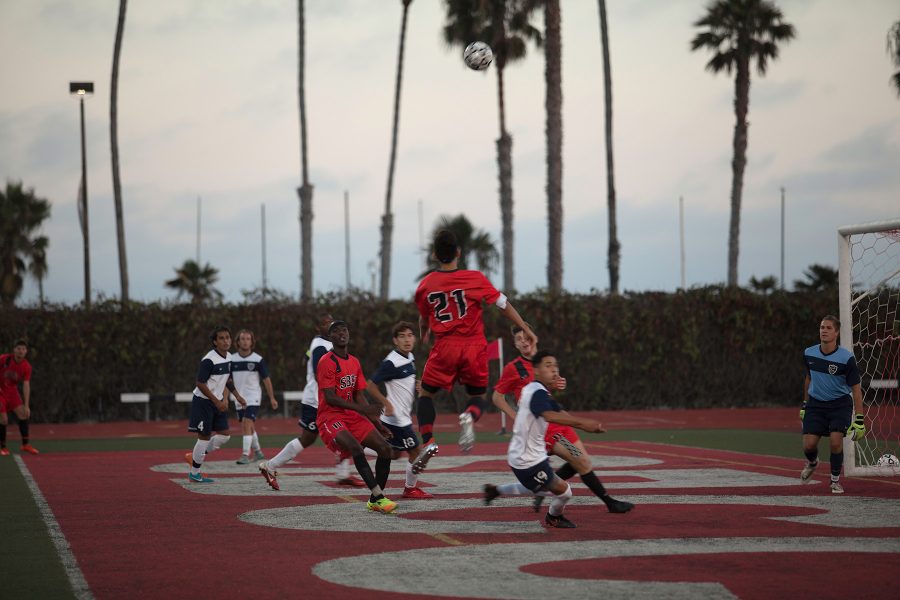 Nicolas Genthon (no.21) attempts a shot on goal against Cypress College on Friday, Sept. 9, at La Playa Stadium. The Vaqueros won 2-0 for their third straight shut out victory.

“That first loss, I’m not gonna say it was a good thing, but we took positives from it,” said sophomore midfielder William Joyce. “And now we’re just building on it.”

Strong opening performances from both squads lead to a halftime score of nil-nil.

Freshman forward Kevin Kwizera found himself one-on-one with Cypress goalkeeper Braydon Welch in the 14th minute but was unable to capitalize, Kwizera had another shot saved by Welch in the 28th minute from seven yards out.

Tempers were flaring towards the end of the first half for the visiting Chargers as midfielder Eddie Mayasich was given a yellow card in the 43rd minute. Referees had to intervene when Chargers defender Peter Carranza shoved Vaquero defender Abiodun Akintioye in stoppage time.

Shortly after the second half began the Vaqueros found themselves ahead in the 57th minute when freshman midfielder Jesse Jimenez scored from 16 yards out on a backwards header assisted off a throw in from sophomore defender Jelan Hutton.

“I thought Jesse played very well,” said City College head coach John Sisterton. “I thought he worked very hard and everyone gave him a good clap when he came off and that’s what he deserved.”

It didn’t take long for the Vaqueros to find the back of the net again as Jimenez placed a perfect through ball for sophomore forward Callum Challinor who buried it past the Cypress goalkeeper from just inside the box in the 58th minute.

“Callum took his opportunity and smashed it into the back of the net,” said Sisterton. “And that’s what we look for in the offensive third. You’ve got to play with no risk and a little bit of flare and go score a few goals.”

The Vaqueros have not allowed a goal since their 2-0 home opener loss vs San Bernardino Valley College on August 26th.

“Ever since the second game we’ve kept our same formation as a team and it’s been really good,” said freshman forward Victor Chavez. “And hopefully in the next game it doesn’t change.”

The Vaqueros look to keep the streak alive heading into next week where they’ll face Bakersfield on Tuesday and Glendale on Friday, both games scheduled for 2 pm at La Playa Stadium.