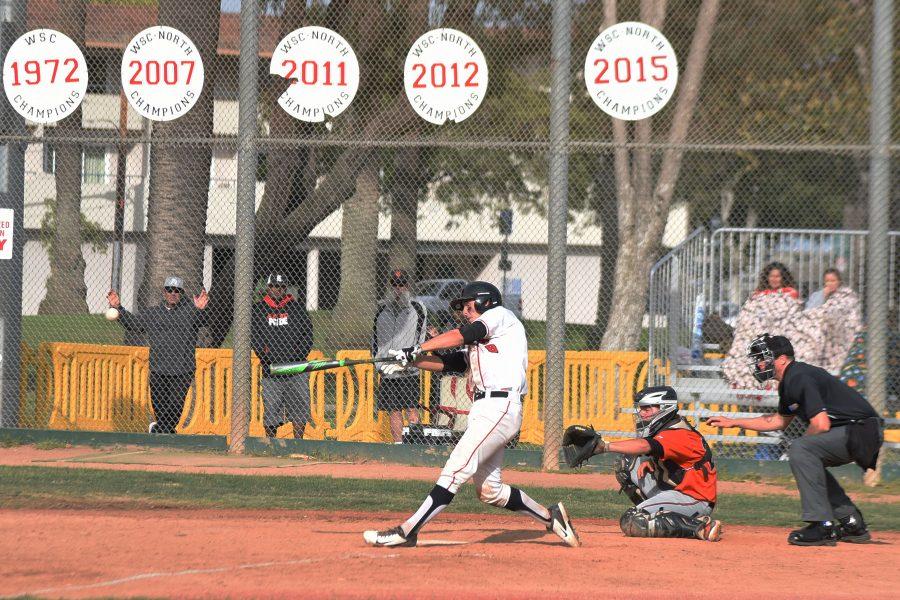 Vaquero sophomore catcher Andrew Cosgrove hits an RBI double in the bottom of the ninth inning to come within one run of Riverside City College in the wildcard playoff game on Tuesday, May 3, at Pershing Park in Santa Barbara. The Vaqueros could not keep the momentum going and lost 3-2.

With two outs in the eighth inning, the Riverside City College Tigers rallied for three runs to end the Vaqueros season with a 3-2 loss Tuesday afternoon at Pershing Park.

The loss eliminates the 15th seeded Vaqueros from the Southern California Regional Playoffs while the 18th seeded Tigers move on to a three-game series this weekend against Saddleback College.

“I thought we did a pretty good job of handing them the game there in the eighth,” said head coach Jeff Walker.

Heading into the eighth inning, City College had a 1-0 lead and Steven Ledesma had struck out four of the last six batters he faced. After the first batter grounded out, Riverside’s Casey Sheehan reached base on a throwing error by third baseman Chris Smutny.

With two outs in the inning, Riverside loaded the bases with a walk and an infield single. That’s when Ledesma hit two straight batters to bring in two runs.

“I felt like I did everything I could to put this team in a position to win,” Ledesma said. “We just couldn’t pull it out in the end.”

Walker then turned to his bullpen, but another run scored off a wild pitch by David Messer to make it a 3-1 Riverside lead.

Going into the bottom of the ninth, the Vaqueros were down two runs and had just four hits in the game, but they didn’t go out without a fight. First baseman Jake Gagain hit a double with one out, but the next batter struck out.

Down to the last out, Cosgrove hit an RBI double to make it a 3-2 game. City College’s season ended when a diving Morgan Lomax was called out at first after a hard hit groundball to shortstop.

“We fought hard, we fought to the very end, so I think that says a lot about the team,” Smutny said. “It just sucks we couldn’t put it together.”

The loss was tough on the team, but just a month ago, it looked like the Vaqueros wouldn’t be in the playoffs at all. The Vaqueros won nine of their last 12 games to qualify for the playoffs and finish the season with a 19-17 record, including 16-8 in conference play.

“If you look at the positives, we started out pretty rough, came back and made it a playoff team. So I was pretty proud of that,” Cosgrove said.