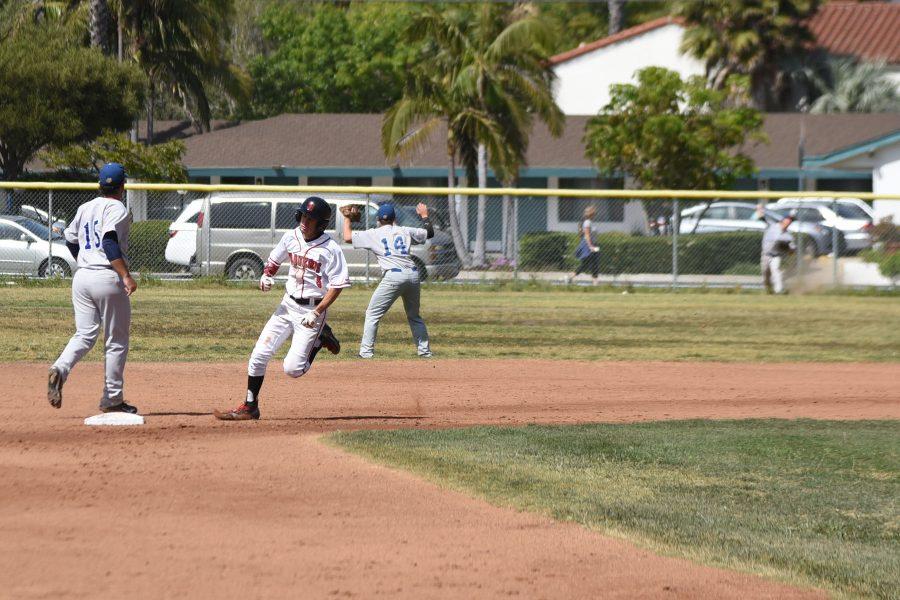 City College infielder Michael Montpas, No. 5, rounds second base on his to third base for his stand up triple on Friday, April 29, at Pershing Park in Santa Barbara Calif. The Vaqueros lost the game 7-3 but finish the season in second place and begin the playoffs on Friday, May 6.

City College baseball had a two-run lead until the eighth inning when the Allan Hancock Bulldogs scored six runs en route to a 7-3 win Friday afternoon at Pershing Park.

The Vaqueros came into the game with five straight wins, but they seemed confident that this loss wouldn’t hurt the team’s momentum heading into the playoffs.

“They’re a good team,” said second baseman Michael Montpas. “I think we should have won, but we’re a great team and I think that this is just going to be a learning experience.”

City College finds outs who the team’s first playoff opponent will be sometime Sunday afternoon when the bracket is released. Depending on the seed they’re given, the Vaqueros could potentially have a play-in-game this week, if not, the team will be in a three-game series for the first round starting Friday, May 6.

The Vaqueros jumped on the board in the fifth, when Nicholas Allman led off the inning with a double and later went on to score off a squeeze bunt by Montpas. The very next batter hit an RBI single to give City College a 2-0 lead.

The lead was cut in half in the seventh with an RBI single by Allan Hancock shortstop Zach Lampreia. However, Allman answered right back by sending the first pitch of the next inning into the middle of Castillo street for his third homerun of the season.

After giving up a single to start the eighth, Ian Clark took a seat with the team leading 3-1, but the bullpen quickly squandered the lead. Seven of the next eight Bulldogs reached base as they poured on six runs to take a 7-3 lead.

“We played seven innings, we didn’t play nine,” said head coach Jeff Walker. “Ian Clark pitched great and Austin Blessing and the defense couldn’t pick him up at the end of the game.”

City College got three more runners on base in the final two innings, but couldn’t take advantage of it as the game ended with a double play by the Bulldogs.

“It’s tough, we have to be able to finish strong,” Clark said. “We have playoffs coming up so maybe this is a good learning experience.”

The loss leaves City College with a 19-17 record, including a 16-8 record in conference-play. After starting the season out 11-14, City College finished by winning nine of its last 12 games.

“With the way we’ve played this year, I think we can be happy with a playoff spot and we have just a good a shot as anybody to take it all home,” Clark said.