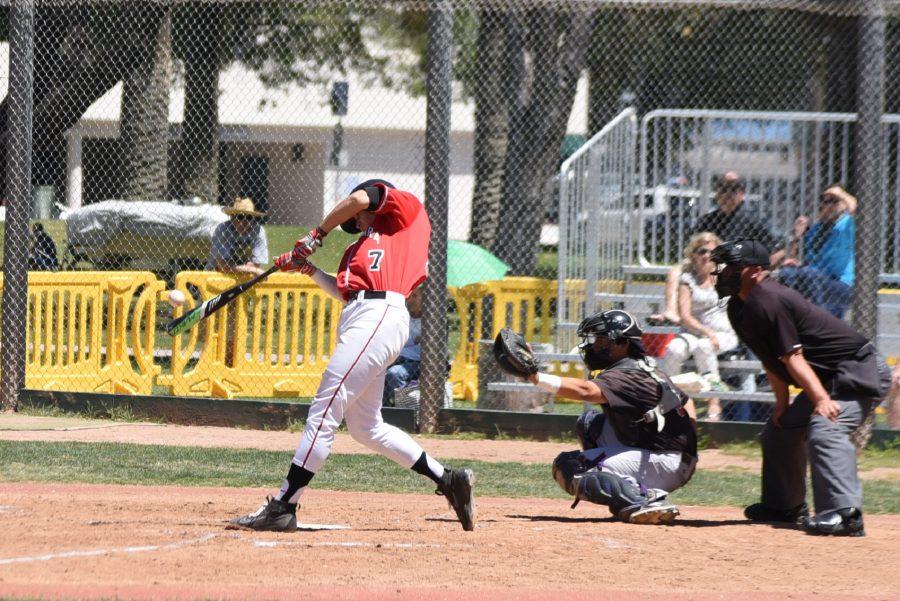 City College infielder Wesley Ghan-Gibson (No.7) hits first career homerun and drives in two runs on Saturday, April 23, at Pershing Park in Santa Barbara. The Vaqueros beat Ventura 6-1 and remain in second place in the division.

The top two teams in the division can advance to the playoffs as long as they have a .500 record or better and City College can do just that with one more win.

“We put ourselves in a good position for a playoff berth today,” said pitcher Ian Clark.

The Vaqueros came into the last month of the season with a 10-14 record but they have now won seven of their last nine games, including the last three in a row.

All three matchups between these teams have been won by the Vaqueros and they can complete the season series sweep this Tuesday at Ventura. 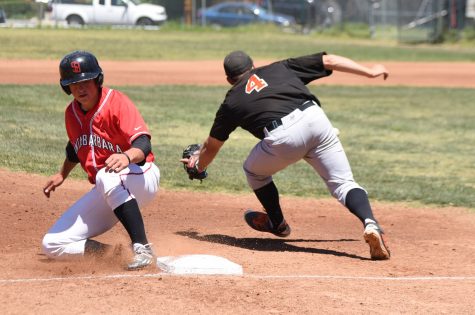 Ryan Cullom City College infielder Christopher Smutny (No.4) reaches third base safely after a throw to first, on the next pitch he scored the first of six Vaqueros runs on a balk on Saturday, April 23, at Pershing Park in Santa Barbara. The Vaqueros beat Ventura 6-1 and remain in second place in the division

“It’s always good to win a series,” Clark said. “And we’re finally above .500 which is a first for the season and I think we’re getting hot right at the right time.”

The City College offense got started early and it didn’t let up. The Vaqueros scored at least one run in each of the first three innings.

Chris Smutny got the offense started in the first inning when he hit a double and stole third. He went on to score on a balk by Ventura pitcher Adisson Pelupessy for the first run of the game.

The very next inning City College shortstop Wesley Ghan-Gibson hit his first home run of the year with a two-run shot over the left field fence.

“It’s definitely nice to have that reinforcement behind you and we’ve been hot with the bats lately,” Clark said about the run support.

Ventura put the pressure on Clark in the top of the third inning when they loaded the bases up with no outs. The Pirates went on to score on a fielder’s choice but Clark was able to escape the bases loaded jam with minimal damage.

“[Clark] got guys on here and there but he made the pitches when he needed to, so that was good to see,” said head coach Jeff Walker.

City College pitcher Brett Gregory came in to pitch the final two innings and he got some help from the defense when Smutny backhanded a ground ball at third and turned a double play to end the eighth inning.

Next up the Vaqueros face the Pirates one last time at 2:30 p.m. Tuesday, April 26 in Ventura.