SBCC swimmer competes in the ocean, sets records in the pool 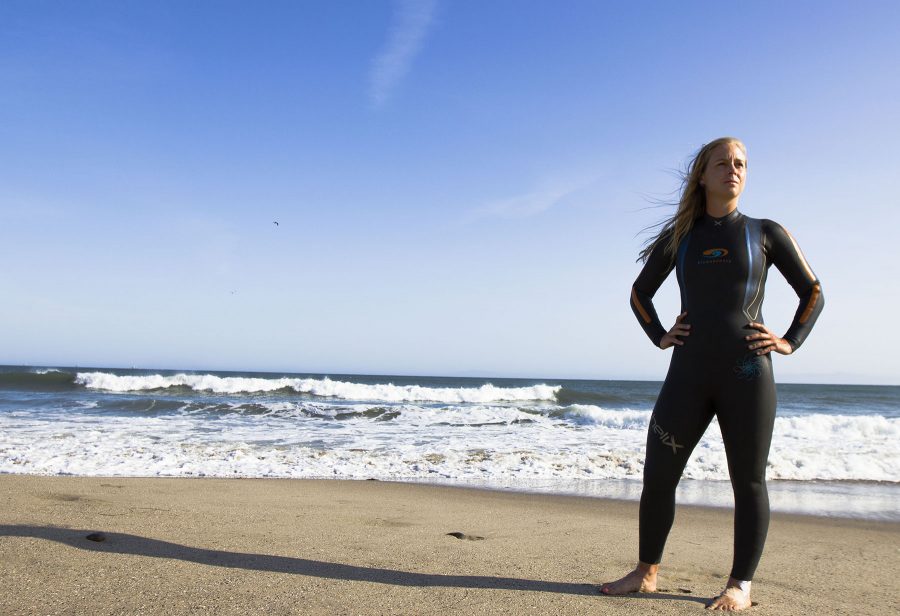 City College swimmer Kristina Hill stands on the beach on Thursday, April 14, at Leadbetter Beach, Santa Barbara. Hill not only broke the school record in the 1000 yard freestyle at the last conference, but she has previously won the open water race, Escape from Alcatraz.

After swimming from the Channel Islands to Oxnard and winning Escape from Alcatraz, City College’s distance freestyle swimmer Kristina Hill is making her comeback in the competitive pool scene.

Hill’s interest for swimming began at the 3 years old and joining club swimming when she was 7. This was just the beginning.

Hill attended UC Santa Barbara majoring in mathematics and minoring in education. She wanted to keep swimming after high school, but wasn’t fast enough for the UCSB team. Instead, she decided to join the triathlon club because swimming was part of it. As part of the triathlon club, Hill competed at nationals for four years.

“I think stepping back and not swimming every single day in order to train for triathlons made me fall back in love with it,” Hill said. “It didn’t really feel forced, more like a privilege and I got to enjoy it more.”

This past year, Hill along with her friend swam from the Channel Islands to Oxnard over Memorial Day weekend.

“That was epic,” she said. “I never thought I’d ever do that, it was roughly 17 miles and there were two shark sightings.”

She also participated in the Ironman Tahoe event in 2013, with a finishing time of 13:30:21. She placed seventh in her age group ranking of females 25 to 29. During the triathlon, she completed the 2.4-mile Lake Tahoe swim course in 58:49, gaining her the fifth spot within the female ranks.

“It’s such a long day that you’re talking to yourself a lot and you ride these roller coasters of emotions,” she said. “With all the training leading up to it I knew I could finish it, I don’t know if I finished it as fast as I could have but at the end I was just glad I finished.”

Hill currently teaches math at Santa Barbara High and coaches the swim team while attending City College and swimming for the Vaqueros this season.

“[Hill] is a very special athlete,” said Chuckie Roth, swim team head coach. “She exemplifies everything that is right about athletics, she works hard and seeks both individual and team improvement. She will leave this season with some nice medals, but she will carry confidence into every second of this day forward. [She] cares so much and it’s a pleasure to coach her, I’m happy our paths have crossed.”

One of Kristina’s favorite swimming moments was her performance at the Pasadena Invitational April where she beat her best times from 10 years ago when she was a sophomore in high school.

“I had these times from when I was a sophomore, I worked really hard my junior and senior year but didn’t get any faster,” Hill said. “So beating my fastest times from 10 years ago felt awesome.”

This past year has been memorable for Hill, from competing in Escape from Alcatraz to swimming from the Channel Islands to Oxnard. She now is training to qualify for the Boston Marathon next year.