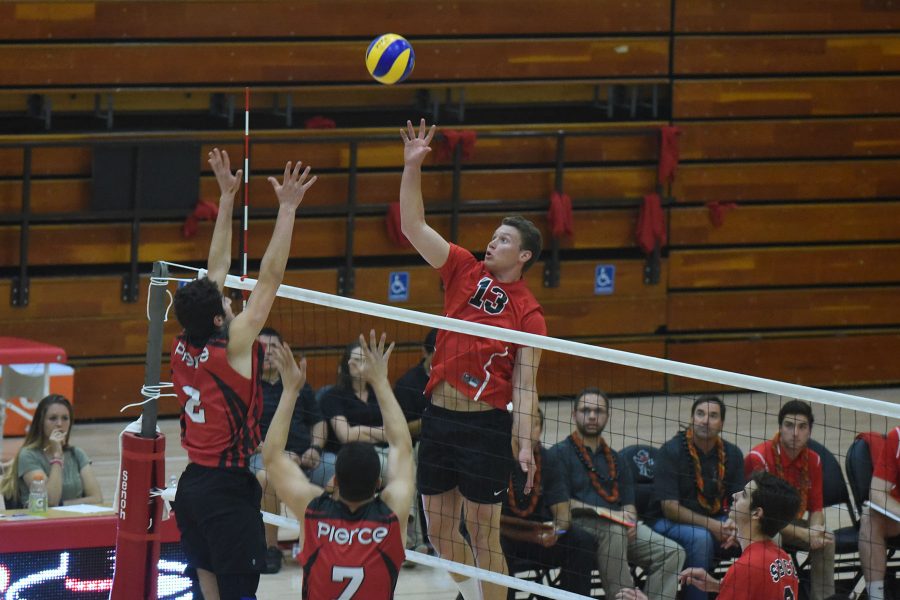 Vaquero Jackson Wopat, playing his last game for City College, hits one of his eight kills against Los Angeles Pierce College on Friday, April 15, in the Sports Pavilion at Santa Barbara City College. City College could not collect the win for the final game of the season and fall 3 games to 1 with scores of 21-25, 25-23, 25-21 and 25-12 against the Brahmas and finish the season 9-10 overall and 4-8 in conference.

Freshman opposite hitter Jackson Wopat, sophomore middle blocker Robert Gulvin, sophomore setter Kyle Smiley and sophomore outside hitter Taylor McCluskey left everything on the court when they played in their last home match at the Sports Pavilion.

“It’s an unfortunate end to the year,” said Wopat.

Each of the four Vaqueros leaving are considering their options to continue their education and volleyball careers at a four-year college.

City College was held to an offensive night as McCluskey led the team in kills, only registering 10 on the evening. Gulvin and Wopat each added another eight kills to the total.

“The first set was alright, we struggled with first contact,” said head coach Matt Jones. “But we did what we wanted to.”

City College began the first set by seizing a small two point lead behind the serving of Gulvin, and would go on to maintain the lead throughout the set, never letting their lead slip below two points.

“We won that set because we blocked well and we swung well,” said Jones. “But our transition setting was still warming up in that first set.”

The Brahmas came out ready for revenge in the second set, matching the Vaqueros point for point before pulling away with a four point lead. City College brought the set within one point at 22-23 behind Smiley serving but L.A. Pierce finished strong and closed out the set.

“In the second set, at 20-22, we only had two kills in the whole set, so that’s a difficult way to win a set,” said Jones. “At least we grinded in that set and almost gave ourselves the opportunity to win.”

After a slow start to the third set, the Vaqueros found themselves clawing their way back into the game to tie the game up at 7. The two teams then went on to trade points until Pierce went on an 8-4 run to close out the set 25-21

“We were doing real well in that third set until we hit this little run where we got in our own heads,” said Jones.

Jones cited the team’s passing one of the biggest weaknesses.

“We’ve passed a lot better than that in the last two matches, our passing has just gone haywire,” said Jones. “It doesn’t make sense our passing should be better at the end of the season not at the beginning.”

The fourth set is where the wheels fell off the wagon for the Vaqueros as they found themselves down 8-3 and continued their downward spiral towards 16-9 and finally 12-25.

“Our serving progressively got softer as the game went on,” said Jones. “Especially in that fourth set our services were all over the place.”

City College finished the season 9-10 overall with a conference record of 4-8.