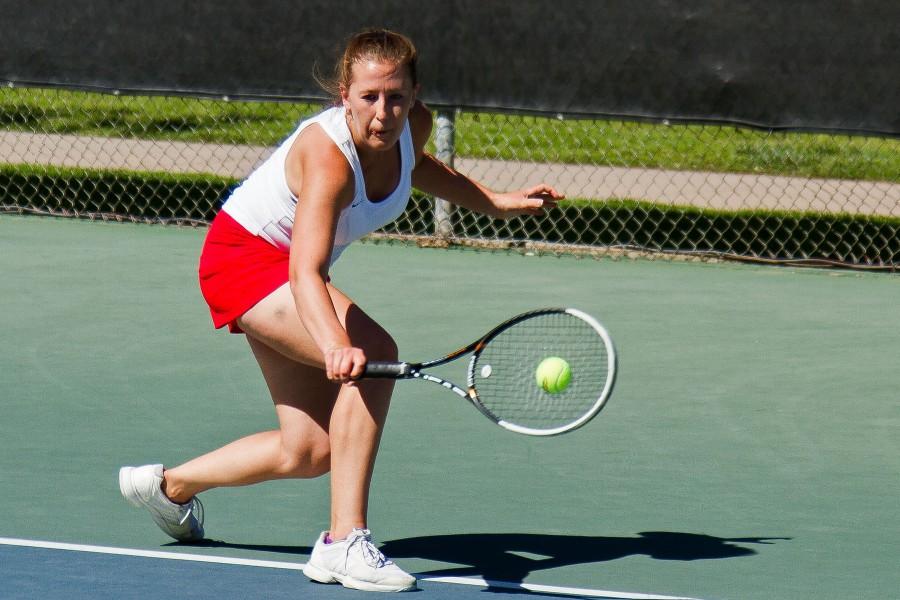 City College Lady Vaqueros tennis team member, Tyler Bunderson hits a slice backhand during her match on Tuesday March 15, at the Pershing Park tennis courts. The Lady Vaqueros won their match handily against visiting Antelope Valley College by a final score of, 8-1, boosting their overall record to 10-2 and 7-1 in conference play.

The Vaqueros’ only defeat of the day came from court eight where Savanna Bickle suffered a tiebreak loss at the end of a close second-set. However, Bickle returned to winning ways on the doubles court, with her partner Maddie Seeds.

“I play with my heart, every point to me is like the last point I’ll ever play,” Seeds said. “Play all in or don’t play at all.”

“In the doubles match we played really strong,” Bickle said. “We connected really well, stayed positive and just played through our mistakes.”

In her singles match, Maddie Seeds faced-off against one of the only two people to have beaten her in a match this season, where she was hoping to exert her revenge. Their first game towards the start of the season led to a tiebreak in which Seeds eventually succumbed to her Antelope Valley opponent, Celsea McGrew.

“I didn’t want it to be close again, I just went out their to win,” said Seeds.  “I’ve got a strong mental game so I was just very positive going into it.”

“I’m guessing that’s payback, hopefully we will see each other again at the conference play-offs,” McGrew said.

Seeds was City College’s stand-out player of the day due to her victory and her impressive serving, tallying a total of 15 Aces.

“She really came out and just imposed her will which was great to see after losing to her the first time,” said head coach Randy Moharram. “I believe that just set the tone all the way down the line. Glendale is undefeated so they’re going to be a big challenge for us, we’ve lost once this season and that was against them. If we beat them then it gives us an opportunity, at least, of being Western State Conference champions.”

The Vaqueros will face Bakersfield at 2 p.m. Thursday, March 17 at Pershing Park, serving as the last home game of the regular season.