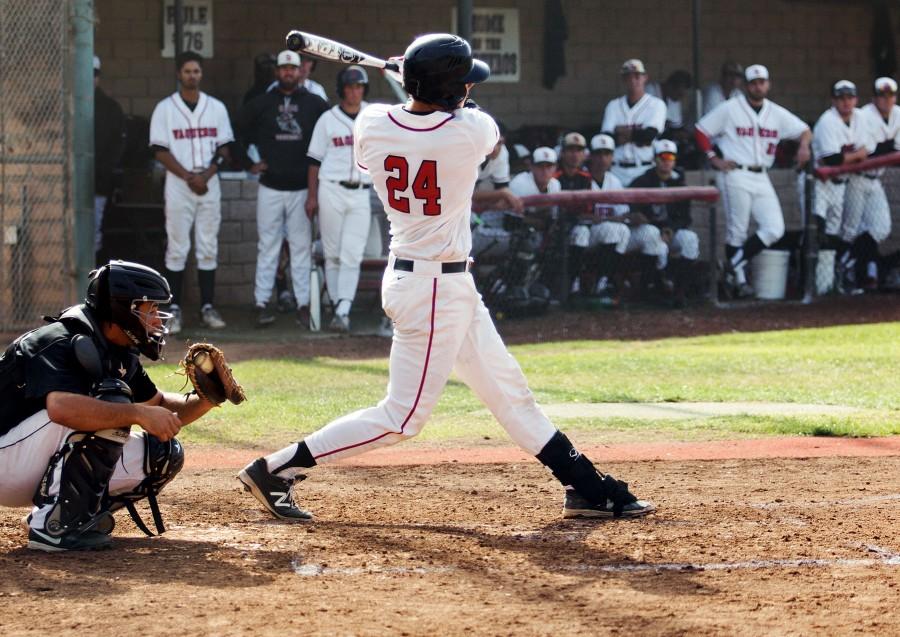 Vaqueros’ catcher Jake Gagain (No. 24) strikes out in the fourth inning against the Cuesta Cougars on Tuesday, March 1, at Pershing Park. The Vaqueros' 10 strike outs contributed to its 9-0 lose. .

A dominant complete game shutout by Neil Uskali led the Cuesta Cougars to a 9-0 win over City College Tuesday at Pershing Park.

The right-handed sophomore struck out ten Vaqueros and allowed just four base runners in the game. Only two of those base runners advanced to second base, while none of them reached third.

“We just have too many outs in our lineup,” said head coach Jeff Walker. “Ten strikeouts, that’s three innings of offense that we don’t put the ball in play.”

Uskali didn’t waste any time before getting into a groove as he sent the first 10 batters down, striking out five of them.

“That guy did a great job at throwing strikes and keeping the ball down all game,” said City College pitcher Ian Clark.

Clark started the game for City College but was pulled after just four innings while Uskali kept rolling.

It wasn’t until the seventh inning that City College advanced a runner into scoring position as Uskali retired 18 of the first 19 Vaquero batters.

“Back to the drawing board tomorrow at practice,” said catcher Jake Gagain, who finished with two of the four City College hits.

In the third inning alone, the Cougars had more base runners than City College did throughout the entire game. Their three hits and two walks earned them a 2-0 lead.

Another two runs were tacked on in the fourth when a grounder went through the legs of first baseman Nicolas Bereaud.

The Cougars kept adding to the lead, with two more runs in the sixth and three in the ninth as five different City College pitchers combined to give up nine runs on 13 hits and five walks.

“We trailed on every side of the baseball, pitching, defense, hitting,” Walker said. “They played their A-game and we didn’t.”

Tuesday’s loss was the second straight for the Vaqueros as their conference record falls to 2-3 while Cuesta moves to 3-0.

Despite the loss, the Vaqueros are confident they can turn things around.

“We just have some wrinkles to iron out,” Clark said. “I think we’ve done some good things in the past and right now we’re a little dead, but we’ve definitely got the team to make it happen.”

Preseason All-American Brendan Jenkings will take the mound for the Cougars as these two teams finish up the two-game series at 2 p.m. Thursday, March 3, at Cuesta College.

“We’ve got our work cut out for us on Thursday on their field,” Walker said.