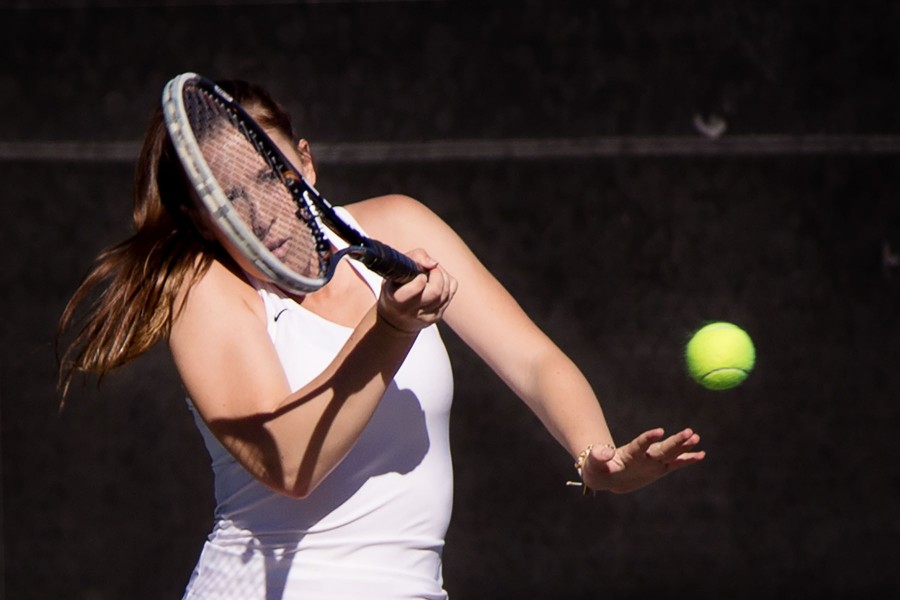 Tyler Bunderson of the City College Women’s Tennis team quickly returns the ball during the tennis match against the Santa Monica Corsairs at Pershing Park on Tuesday, Feb. 16. The Vaqueros won 9-0.

It was game, set and match for the City College women’s tennis team on Tuesday as they dominated Santa Monica 9-­0 at Pershing Park.

Playing in the harsh heat, the Vaqueros fought their way through to straight set victories in their consecutive games.

“Along the line they all played excellently,” said assistant coach Christina Klein.

Klein commended the hard work and grit of team captain, Julianna Adelman, who stood out to her today as she battled her way through a tie­break in the second set against Santa Monica’s Madison Daniel. Klein said it was due to her confidence and ability to close the set when it matters most.

“You’re always worried when you’re in a tie­break,” Adelman said. “It’s just about keeping your head up and making sure that you’re being consistent.”

Adelman won the first game comfortably at 6­-2 but allowed the second to start to slip away after she let a 3­-1 lead disappear. A period of mistakes and double-­faults allowed her Santa Monica opponent to fight the score back up to 3­-4.

Overall, for Adelman, hers was a game won with her aces.

“I felt like my serve was rocking today,” Adelman said.

Returning Vaquero Maddie Seeds also had a successful day as she won in both the singles and doubles matches. Seeds said that the best thing about her game was her mentality, the focus needed to win in harsh conditions under the mid­day sun.

Sporting her unique two-handed racket and her backhand, she fought off her Santa Monica opponent, Maŝa Petrovich, in a game of stamina with long rallies.

“It’s my favorite shot, my best shot,” Seeds said. “It’s more consistent and has a lot of power, I can place it wherever I want.”

Adelman was confident in her team going forward.

“Everyone’s really awesome, we all work together,” she said.