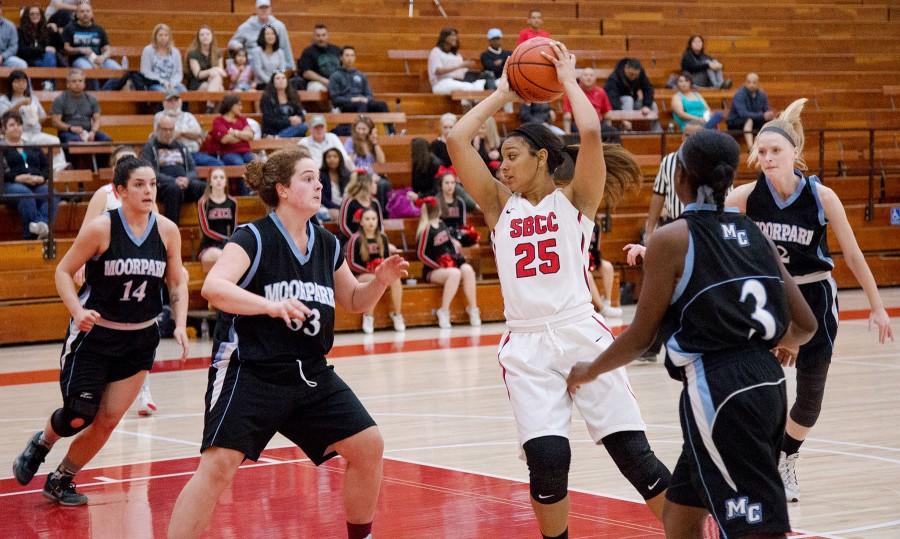 City College lady Vaquero, Destinee King (no. 25), looks for an opening against the Moorpark Raiders at the Sports Pavilion on Saturday, Feb. 13. The Vaqueros lost 62-53.

The City College women’s basketball team received its twelfth loss of the season after falling to the Moorpark Raiders 61-53, in an intense game Saturday night at the Sports Pavilion.

The Lady Vaqueros started out strong the first half, but numerous turnovers kept them from pulling away with a win.

The lead was exchanged numerous times as the Raiders took advantage of the Vaqueros mistakes, and held on to the lead through the end of regulation.

“We were on the edge of getting a win,” said freshman guard Jocelin Petatan. “We just couldn’t pull through at the end and they did.”

City College had 27 turnovers on the night that lead to the team’s costly late season loss. Some defensive complications also contributed to the final score.

“We ran a few different defenses that were confusing them and working,” said freshman guard Kesler Johnson. “But then we started confusing ourselves and began to struggle on defense.”

Moorparks sophomore forward Sydney Perry exploited the defensive errors committed by the Vaqueros as she tallied up 31 points. With 12 of those points came in the 3rd quarter alone.

“[Perry] beat me quite a few times,” said Kesler. “We made adjustments that worked and stopped her, but we made them too late in the game.”

Moorpark made some beneficial adjustments at halftime as they came out strong and went on a 12-0 run to start the 3rd quarter. City College had a run of their own as they cut the Raiders lead and tied the game at 36-36.

The lead was exchanged multiple times until Moorpark pulled away and built up a lead that the Vaqueros couldn’t overcome.

The Raiders sophomore guard Cydney Bolton had a huge 4th quarter as she recorded 14 points to help Moorpark secure the lead, as well as the win.

It was a heavily self-criticized game by the players and coaching staff.

Turnovers, insufficient patience, and returning to bad habits is what hurt the team, the key is to play with tactical intelligence, said Krul.

“We have to have tactical intelligence as coach says,” said Kesler. “We need to be aware of where the ball is going next, especially on fast breaks.”

The loss gives City College a 14-12 overall record and a 5-5 conference record, which potentially knocks them out of playoff contention. The lady Vaqueros will need to win the their next two games and will need certain teams to lose.

Their last home game is Saturday Feb. 20 at the Sports Pavilion against L.A. Pierce.

“Next Saturday is our last home game and it’s our cancer night,” said Krul. “We want to get as much support as we can.”