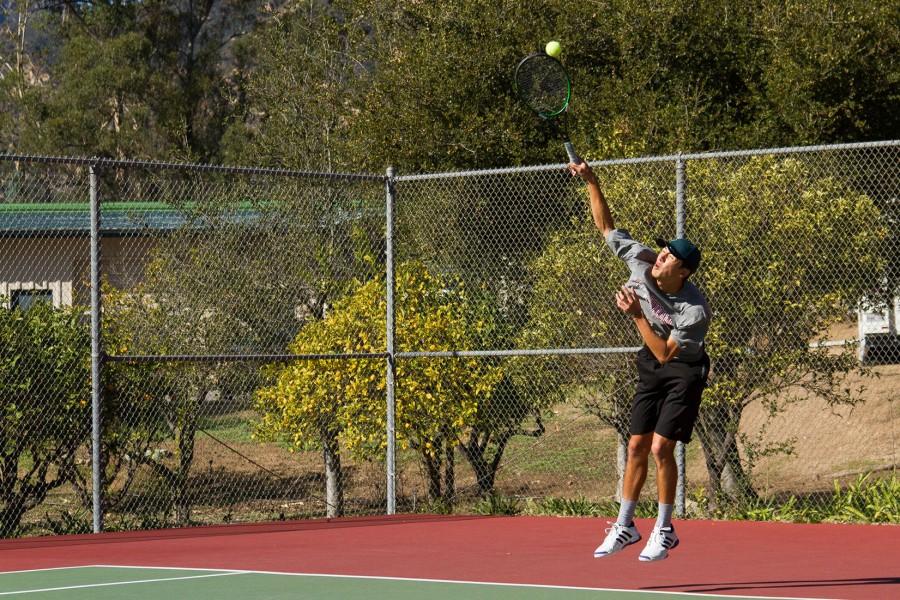 Vaqueros’ tennis team member, Andrew Tufenkian, a graduate from Dos Pueblos High School, demonstrates the agility and power of his serve during a preseason warm up match with Westmont College on Tuesday, Jan. 26. Andrew is a transfer student from Cal Lutheran University, returning to his home town after hearing that Santa Barbara City College, was fielding a tennis team after a three year hiatus from intercollegiate competition.

On Thursday, Feb. 4, the City College men’s tennis team will hold its first match since 2013, after a fundraising campaign by the Santa Barbara community.

The new head coach Randy Moharram, has commended the fundraising efforts by

Athletic Director Ryan Byrne served on the initial task force that brought together college administrators and community members to discuss the status of the men’s intercollegiate tennis team. He worked alongside the foundation to ensure City College gets its team back.

“It was definitely a team effort to reinstate the men’s tennis team,” Byrne said. “There were a lot of people who put in a lot of hours and made a lot of asks. I really appreciate their efforts. The foundation was an integral part of this process”

The patrons set themselves a fundraising benchmark of $30,000 by last March, which was then matched by the foundation during its annual fundraising drive. The patrons have raised a huge $47,100 in total, with two more successive annual drives with the same target of $30,000 in order to keep the team through 2018.

This is Moharram’s first time as a head coach but he has been with City College for many years, with six as the assistant coach of the basketball team under his belt. Prior to this he coached in the Bay Area and local high schools.

“Moharram does a great job building and fostering relationships with our student athletes and really understands the big picture mission,” Byrne said.

Although he hasn’t coached tennis before he has faith in his assistant coaches, Michael

“I’m very excited about the season,” Byrne said. “I think that we have put together a very solid roster and have brought in a lot of local students who we believe will be successful on and off the court. I believe that we have also made a lot of progress in terms of creating excitement from our local tennis community about the program.”