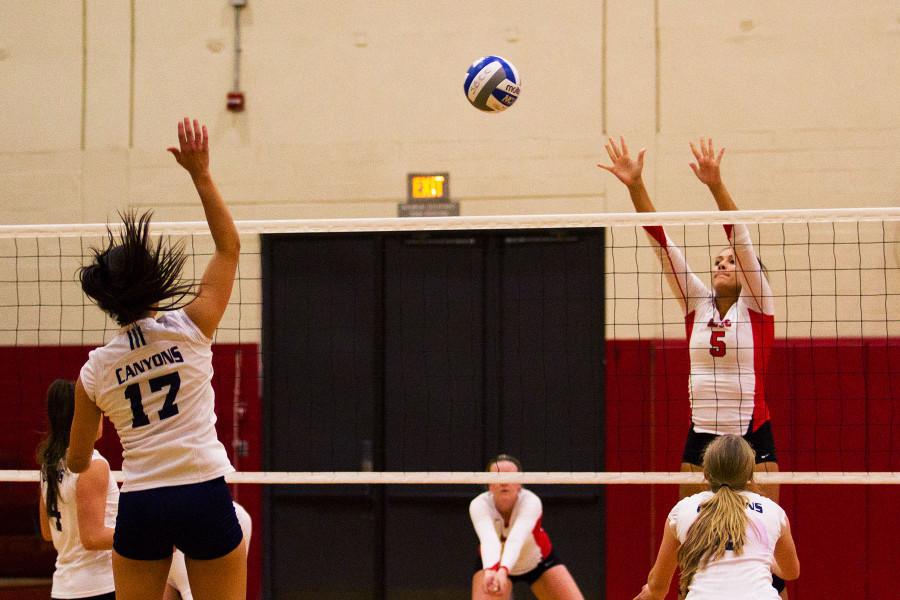 Middle blocker Isabella Thompson (No. 5) misses the ball from College of the Canyons player Emily Bible (No. 17) near the end of the fourth set, Tuesday, Dec. 1, in the Sports Pavilion at Santa Barbara City College. The Cougars beat the Vaqueros, 3-1.

City College lost in the Regional Final against College of the Canyons 1-3 Tuesday night at the Santa Barbara Sports Pavilion.

Canyons will be moving on to the State Final Four to face L.A. Pierce.

The stands were completely filled on both sides, as 120 people attended the game. Energy was high and cheers rang out loudly.

City College and Canyons were keeping close to one another in the first set. City College managed to get ahead by a few points and maintained a small lead through the rest of the set. They went on to win the set 25-22.

Canyons took an early lead in the second set. They eventually built up a 21-14 lead. City College managed to narrow the gap but Canyons won the set 25-21.

The third set started with City College taking a lead. The score was 15-10 when Canyons started coming up from behind. The score soon was 21-22 and the momentum carried Canyons to win at 26-24.

Canyons took an early lead in the fourth set and maintained it throughout. They led the early set by a few points. When the score read 17-13 they took off on a streak and managed to take the set and the win 25-17.

“It was a good game,” said outside hitter Katelynn Womack. “It’s too bad we lost.”

The players and coaches from both teams all shook hands in the aftermath of the game and gave good gestures to the other team.

“They had a go-to on their team and that was number 17, [Emily] Bible,” said head coach Ed Gover. “I’d really have to tip my hat to Bible.”

“[City College] played really well,” Bible said. “This game was a lot of fun and the other girls did awesome.”

While the season has ended, Gover has hopes for next season and looks back on this past one fondly.

“This team bonded together like a family,” Gover said. “They worked together. There’s a real tightness with this group.”

City College finishes the season with a 25-4 record overall.  Tonight’s loss was the Vaqueros first home loss of the season in 13 games.