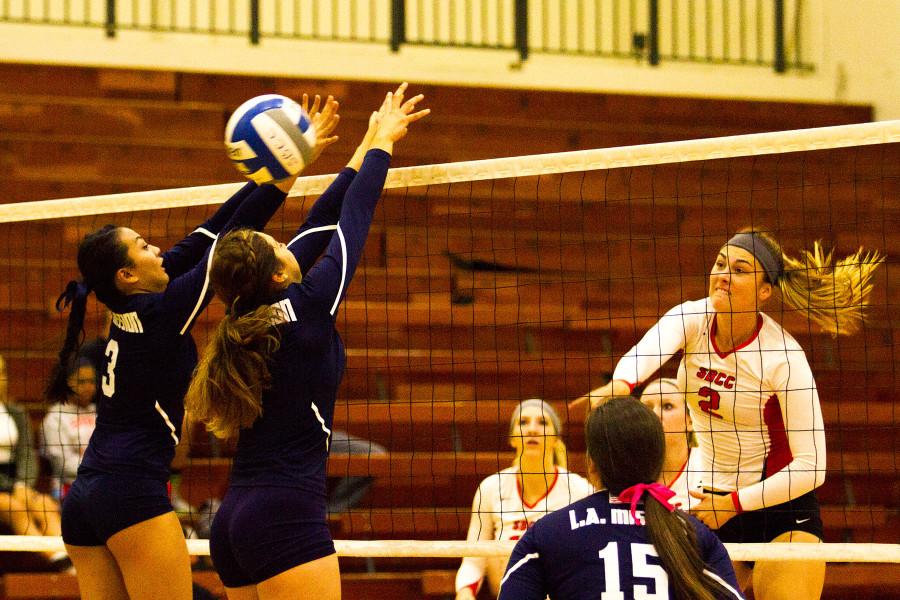 The Vaqueros swept the LA Mission Eagles 3-0 to give them their fourth consecutive conference title and send them to the playoffs Wednesday night at the Santa Barbara Sports Pavilion.

“We have been practicing a lot this past week and it really paid off,” said outside hitter Katelynn Womack. “And we came out with the win.”

This was the last game of the regular season for the Vaqueros. The night was also sophomores night, honoring sophomores Womack, Alissa La Rocca, Tristen Thompson, Kaitlyn Clemann and Paige Sabin. The players received flowers and framed team pictures from freshmen on the team.

City College had an early lead in the first set leading 12-6. The Vaqueros maintained control in first set and cruised to a 25-18 win.

At the end of the first set the Vaqueros were pumped up. But the momentum didn’t carry.

The second set was neck and neck throughout. The scoreboard read 15-15. Minutes later it read 17-17. The Eagles took the lead but the Vaqueros came from behind and took the second set.

The third set started with LA Mission giving it their all. City College had a hard time keeping up but they always managed to stay a few points close behind. Both teams continued until the score was 22-24 with LA Mission in the lead.

The Vaqueros managed to catch up after multiple rallies. They were determined.

“It was tough but we had to fight through it,” said Womack.

Then with the score at 24-24 the Vaqueros and Eagles had a rally that lasted almost two full minutes. With a dive from Thompson it continued to the Vaqueros to scoring the point moments later.

Then an ace serve by Shiloe Parsons gave the Vaqueros the 26-24 final set and the game.

Gover said that this was the team’s 5th time being down 22-24 and coming back to win this season.

“I knew it would be tough,” said head coach Ed Gover. “We played hard and I’m glad we could provide entertainment to the great fans.”

“We’ll need this in the playoffs,” Gover said.

City College plays its next game and its first game of the playoffs 6 p.m. Tuesday, Nov. 9, in the Santa Barbara Sports Pavilion.