City College gets victory against Antelope Valley in overtime 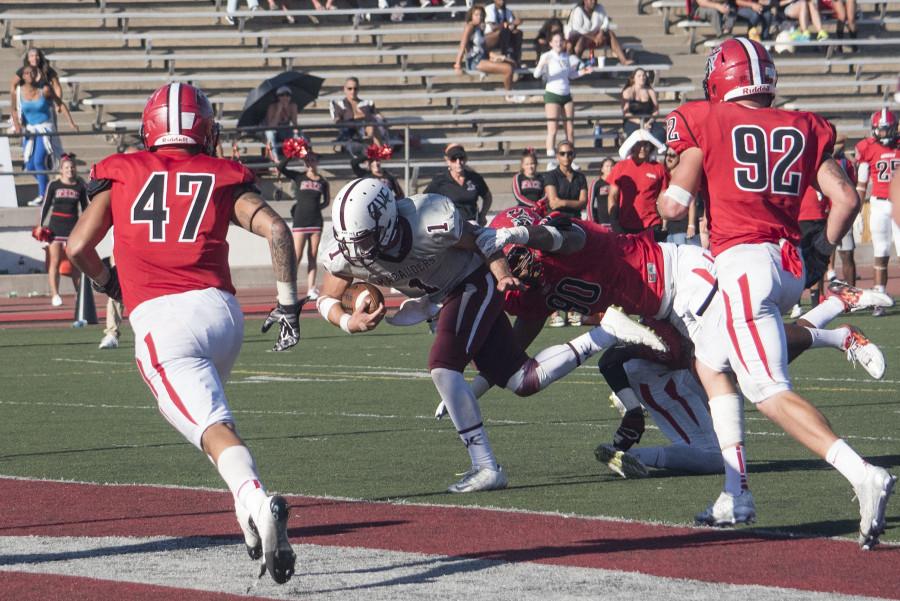 In a game full of big plays, City College left with a 41-38 win in an overtime shootout with Antelope Valley Saturday at La Playa Stadium.

“That kind of game right there does a lot for the confidence,” said head coach Craig Moropoulos.

The Antelope Valley Marauders took control early, scoring on the first two drives and taking 14-3 lead. However, the Vaqueros answered with the first of many big plays as Alex Cuevas rolled to his right and found Jason-Matthew Sharsh down the field for a 63 yard touchdown pass.

Cuevas filled in for the injured Brandon Edwards at quarterback with 384 total yards and three total touchdowns.

Sharsh caught two of those touchdowns and finished with 121 receiving yards.

“It was great,” Sharsh said. “We had that energy and we executed.”

City College added another touchdown before the half and led 17-14 at the break. But the second half started with Michael Phillips intercepting a tipped Cuevas pass, leading to an Antelope Valley field goal to tie it.

After another Sharsh touchdown catch, Antelope Valley answered quickly yet again. It just took two plays, a 40 yard pass then a 28 yard touchdown pass from Blake Shepherd to Milton Cheek.

City College struck back even faster when tight end Alex Argent received the short and high kickoff and returned it 72 yards for the touchdown.

The City College defense couldn’t stop Shepherd as he ran in for a three yard touchdown to tie the game with just 28 seconds remaining.

“Their quarterback scrambled real well and we had some trouble containing him,” said defensive lineman Clayton Hanly. “But overall we’re just a very tough disciplined defense and we’re never going to stop coming for you.”

In overtime that City College defense stopped Shepherd and the Marauder offense, who elected to go for it on fourth down instead of kicking a field goal. On fourth and six Hanly and Evan Defer took down Shepherd for the sack, which gave City College a chance to win it with just a field goal.

In a game against LA Valley earlier this year City College kicker Blake Levin missed an extra point then later missed the game winning field goal. After today’s game, Levin said he felt like he was the reason for that loss.

“This game I told everyone ‘no we’re not losing because of me,’” Levin said.

Next up for City College is undefeated Santa Monica College at 1 p.m. Saturday, Nov. 7 at La Playa Stadium for the final home game of the year.