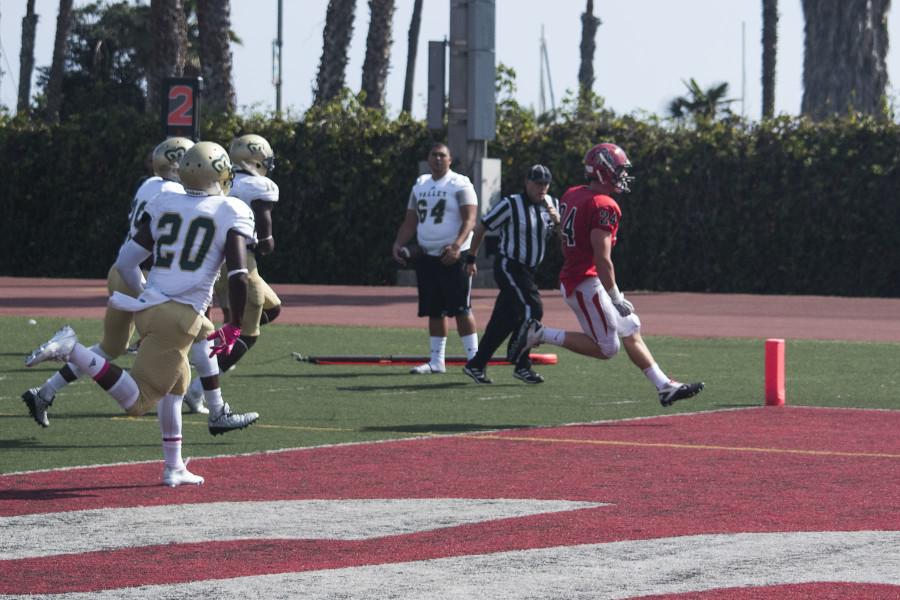 Vaqueros running back Chad Woolsey (No. 24) strides into the end zone for a touchdown with opposing team members in pursuit, bringing the score for Santa Barbara 6 to 7 over rival team LA Valley, at 1 p.m. Saturday, Oct. 17 at La Playa Stadium, Santa Barbara City College. The game ended in a 27 to 28 loss for City College to LA Valley.

A missed extra point in the third quarter proved to be the difference in the Vaqueros’ 28-27 loss against LA Valley Saturday at La Playa Stadium.

With just 10 seconds left in the game, City College’s final chance came down to a 28 yard field goal attempt that was hooked left by kicker Blake Levin. The loss puts the Vaqueros at 2-1 in league play while LA Valley improves to 3-0.

“It’s extremely frustrating,” said quarterback Brandon Edwards. “I thought we had it at the end.”

The LA Valley Monarchs got off to a quick start with a pick-six on the opening drive of the game. However, Edwards and the City College offense were able to shake it off and score a touchdown on the next drive.

In the second quarter the Vaqueros pulled out a familiar trick play as wide receiver Osha Washington took the hand off and then found a wide open Calvin Crockett for a 42 yard touchdown pass.

On the very next drive City College kept it going with a 40-yard touchdown run by Marvin Millett to make it 21-7. The Vaqueros looked to add to their lead late in the first half as they got into the red zone but LA Valley forced and recovered an Edwards fumble.

With just two minutes left in the half the Monarchs were able to march down the field and make it 21-14 with a 31 yard catch and run by La’Dontez Bryant.

LA Valley kept that momentum going in the second half with a 20-play 65-yard drive that was capped off with an Anthony Wyche touchdown run on fourth and goal. During the drive the Monarchs had two fourth down conversions and used up almost 10 minutes of game clock.

“That was tough because they just kept making first downs and they just chewed up a bunch of time,” said head coach Craig Moropoulos. “We got to do a better job on third and fourth down defense.”

The initial extra point was made but called back due to an illegal formation against LA Valley. Since it was a dead ball foul the Vaqueros could not decline the penalty and had to re-kick. Levin missed the kick on the second effort.

“That one hurt me more than the field goal,” Moropoulos said. “There’s just no excuse for that.”

Down six points in the fourth quarter LA Valley blocked a punt and recovered it at the Vaqueros’ 22 yard line. A few plays later Wyche was able to run in another one yard touchdown on fourth and goal to take a 28-27 lead.

City College had three minutes to come back and was able to march down the field, setting up Levin’s 28 yard field goal that he hooked left.

“It came down to the last play and it just didn’t go our way,” Millett said. “It’s hard right now but I know we’ll be back on Monday ready to go.”

City College looks to bounce back next week at 6 p.m. Saturday, Oct. 24 at LA Pierce.