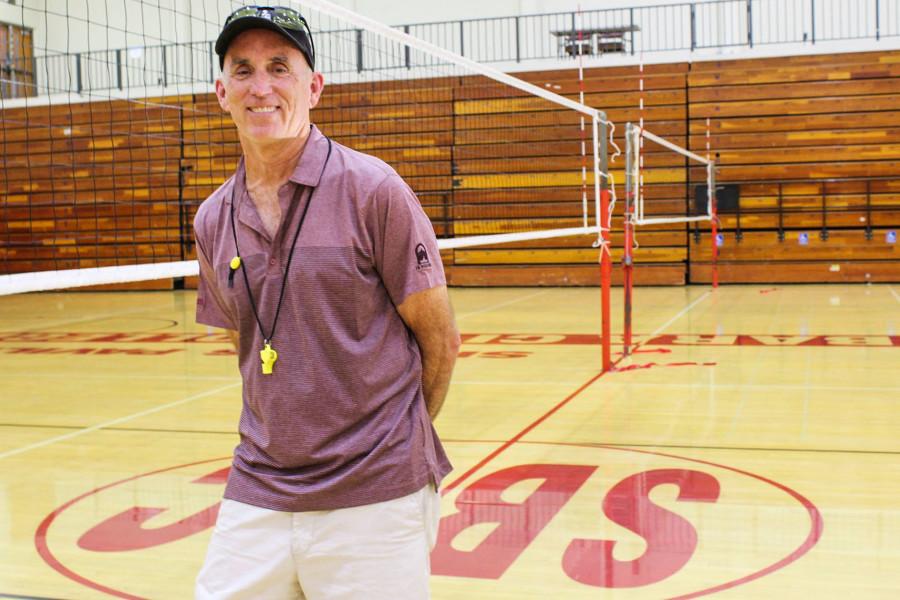 Ed Gover, head volleyball coach at Santa Barbara City College, has been coaching the lady Vaqueros for over 20 years. He has won four coach of the year awards and the Vaqueros have won three straight conference titles and over 300 matches under his leadership.

Over the past 25 years, Ed Gover has changed the culture of women’s volleyball at City College and turned them into one of the top teams in the state.

The Vaqueros have won five conference titles in the last six years, with a record of 63-6 in conference play over that time. It’s a much different team than the one Gover initially took over in 1990, when short on players he had to go out and find some just two weeks before the season.

“It was difficult,” Gover said. “Each year was unique and different.”

Despite those rough years early on the Vaqueros have won over 60 percent of their games under Gover.

Growing up his family moved every three years because his father was in the military. He and his three siblings followed in their father’s footsteps and served their country. After three years of service he went to Santa Ana College to study business.

While he was in school a friend of Gover asked him to help coach a club volleyball team. He had never played before but he made sure that he would learn from a great coach.

Gover began attending the women’s national team’s practice everyday and watched Karch Kiraly coach. That’s when he fell in love with the game and became eager to learn more.

“I was just really fortunate to be around such high level coaching,” Gover said. “I think that’s what makes me still hungry.”

Gover went on to attend the national team’s practice everyday for the next three months.

His love for coaching led him to change his major and become a teacher. He later got his degree at Long Beach. Now he teaches at Santa Barbara Junior High, where he’s taught for the last 25 years. His experience teaching and attending Kiraly’s practices has taught Gover a lot about how to best communicate with his players.

Before each game Gover gives the players a sheet that lists their responsibilities. He says it’s usually just two or three things for each player so that everyone knows exactly what’s expected of them.

“He knows different techniques of different players,” said team captain Katelynn Womack. “And how to get in the mind of the player.”

Womack said that Gover allows the players to have a voice and he relies on the team captains at times to communicate with the other players. One of the things that Gover and the team captain really focus on is serving, and it definitely shows. They already have 22 serving aces in just three conference games with one of those games coming against LA Pierce, who was ranked number one in the state.

Gover prepared the team for LA Pierce with film from the team’s loss to Pierce early in the season. He studied the film and gave his players their sheets that had their responsibilities on them.

“We know what they’re going to run,” Gover said. “We knew we were going to hit certain spots.”

The Vaqueros are aiming towards their fourth straight conference titles but Gover could never grow tired of this.

“Those are just accomplishments from all the hard work they did starting in July,” Gover said. “That’s where the reward comes from. That’s what I really enjoy.”