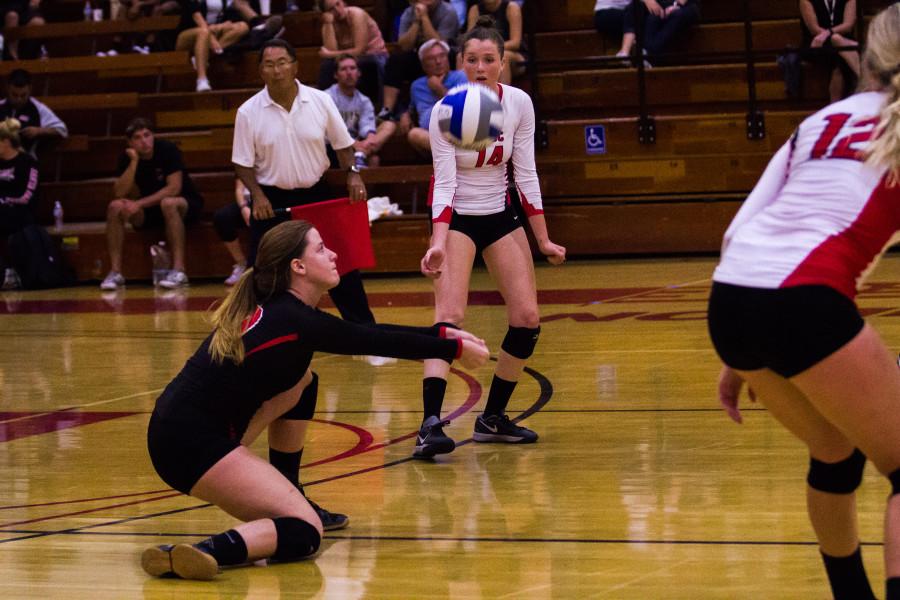 Vaqueros defensive specialist Tristen Thompson (No. 10) returns a volley during the thrid set scoring a point for the team bringing the score to 21-17 in a match against Peirce College on Wednesday, Oct. 7, 2015 in the Sports Pavilion on East Campus. City College played four close sets with scores of 18-25, 25-21, 26-24, 24-16 amounting to an overall 3-1, their next home game will take place on Friday, Oct 9 against Allan Hancock College.

Offensive hitter Katelynn Womack led the team with 11 kills and 13 digs, followed by defensive specialist Raleigh McKinney with 18 digs and setter Shiloe Parsons who had 22 assists.

Both Hannah Cantrell and Isabella Thompson got their hitting averages up to .500 as well.

“We have had some better practices since our first loss and we worked really hard,” Womack said. “And we pulled through.”

The Vaqueros experienced their first loss of the season to the Brahmans back in August but they came back this game with a vengeance showing that they still had some fight in them.

The Brahmans came out strong in the first set as the City College offense stalled. The set went by quick.

By the end of the first set adrenaline was racing and fans on both sides were cheering. Womack started the second set with a kill and the momentum carried.

But the Brahmans caught up quickly after falling behind a few points. The match then turned into a back and forth affair of someone trying to take the lead. The Vaqueros eventually took the second set 25-21.

The third set started out similar to the second, but was even closer. City College had a six point lead but Pierce soon led 23-21. Both teams rallied back and forth but eventually the Vaqueros were able to come out on top 26-24 with a kill off a block by outside hitter Shannon Friend.

The Vaqueros finally took off in the fourth set. Within minutes they had an 11-4 lead and were still going strong.

“We could have gotten used to the pace earlier,” said head coach Ed Gover. “But we got into it as time went on and the whole team came together.”

The Brahmans tried to catch up but couldn’t quite make it. With the Vaqueros leading 21-12 the game was nearly finished.

The set finished with the Vaqueros winning 25-16 as the crowd roared its approval from the stands. The Vaqueros are ranked fourth in the state and this win puts them at 14-2 for the season.

“Next game should be a lot easier,” Womack said. “Hancock is not known to be that good of a team.”