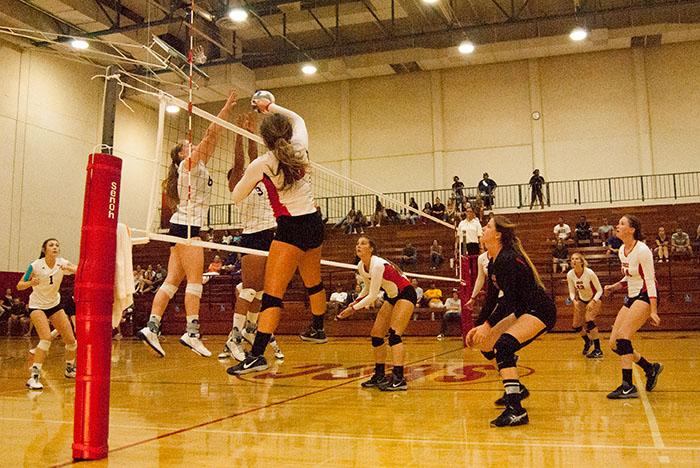 Santa Barbara City College outside hitter Katelynn Womack (No. 18) gets the ball past College of the Canyons blockers to score a point in the fourth match, 17-18, on Wednesday night, Sept. 30 in the Sports Pavilion in Santa Barbara. The Vaqueros beat the Cougars, 3-1.

The City College women’s volleyball team finished off non-conference play Wednesday night with a 3-1 win over the College of the Canyons Cougars at the Sports Pavilion.

The Vaqueros were led by their stellar serving as they racked up 15 aces in the match.

“Our team is very pass-serve oriented,” said head coach Ed Gover. “If we pass well and serve well, we’ll keep the other team a little out of system.”

The tone was set early when four different Vaqueros tallied up a total of five aces in the first set alone, including two from freshman defensive specialist Raleigh McKinney (No. 14) who ended up with five aces in the match.

“In practice we do this Stanford serving drill where you just basically drill the corners,” McKinney said. “When I was serving, I was just really focused on that drill.”

Sophomore outside hitter Katelynn Womack (No. 18) added an ace of her own which gave City College an eight-point lead. But the Cougars came storming back with an 8-1 run.

Gover called a timeout to regroup and the Vaqueros answered with a kill from freshman outside hitter Shannon Friend (No. 11) followed by the fifth and final ace of the set from freshman setter Shiloe Parsons (No. 9). City College went on to win the set 25-21.

The second set went back and forth until Canyons started to pull away with a 21-16 lead. City College went on a little run to narrow the lead to two, forcing Canyons head coach Lisa Hooper to call a timeout.

The timeout didn’t slow the Vaqueros down as they scored the final four points of the match, including two kills from Womack and two aces from freshman Hillary Bean (No. 7), giving the Vaqueros a 25-23 set win.

“Canyons is a very good team,” Gover said. “They have a lot of weapons and our serving stayed strong when we needed it to.”

In the third set, City College added another five aces but the Cougars were able to avoid the sweep by ending the set with a 12-4 run.

The Cougars looked to send the match into a fifth set but Womack wouldn’t let that happen. Four of the first 10 Vaquero points in the set came from Womack. The Cougars hung in there and had a chance to win the set when they took a 24-23 lead but Womack answered with her seventh kill of the set to tie it up. The two teams tied up again at 25 but a big kill from Friend finished off the  match with a 27-25 set win.

The win puts the Vaqueros at 12-2 for the season and are ranked sixth in the state. Conference play starts this Friday at Cuesta as City College looks for its fourth straight conference championship.

The next home game is Wednesday, Oct. 7 at the Sports Pavilion against rival LA Pierce, who beat the Vaqueros in a tournament earlier this year.

“We love playing [LA Pierce] because they’re really tough competition,” McKinney said. “But I think we play better at a higher level so I’m really excited for that.”