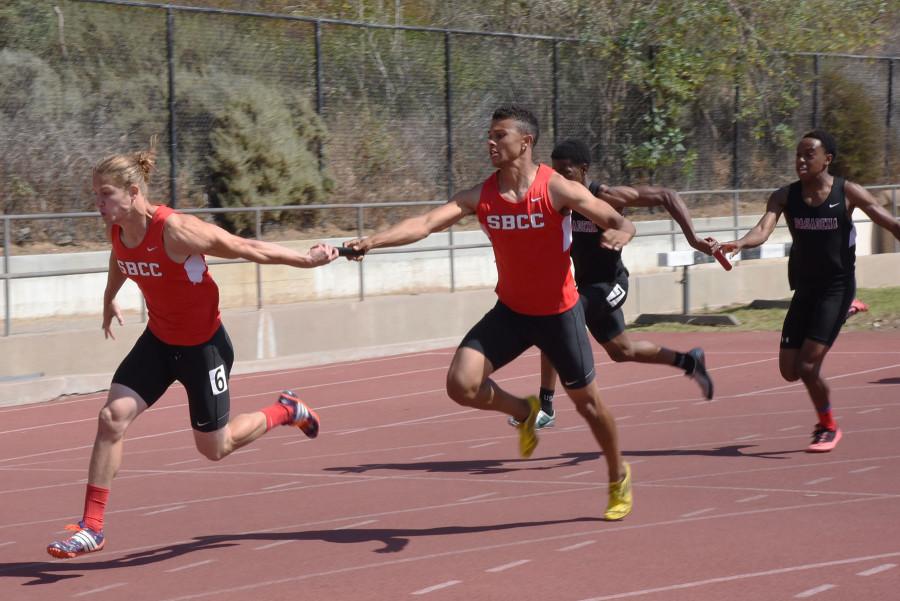 City College track and field athletes set their nerves aside to win events, and for some, ranking in the top five mark of school records during the Easter Relays Friday at La Playa Stadium.

The men’s 4x100m relay team placed first with a time of 42.18, tying the fifth best all-time mark in City College history. Throwers performed well at Westmont College, also placing in the top 10 for the hammer throw.

“I’m feeling really great,” Higby said. “It’s a really great feeling when you finish first in a race, especially when it’s a relay and my teammates can share the glory with me.”

Team captain Dean Roell won the women’s 1500m race by about 200m, with a time of 5:02. She used her competition as her motivation.

“Coach told me to get out and stay aggressive,” Roell said. “It was a great race. They definitely kept me on my toes.”

Teammate Olivia Carlstrom was the in second place (behind Roell) when she had to drop out of the race due to knee issues.

Jessica Escalante competed in discus, throwing a personal record of 31.28m. Alyssa Garrett took first in the 400m hurdles, and was also a part of the winning team in the 4×400 meter relay.

Head coach Scott Fickerson and assistant coach Ryan Rupcich train their athletes five days a week. They don’t usually focus on times, but for this particular race they did. Therefore, they went easier on the athletes this week.

“For this meet we actually backed off a little bit so they are well rested,” Rupcich said.

Many of the distance runners were injured and unable to compete.

“We have so many injuries and were only in the middle-end of our season, so we just have to try to keep everyone healthy,”  Rupcich said. “That’s my number one goal right now.”

It was a very hot day with many Vaqueros cheering each other on.

The Vaqueros are scheduled to compete next at 1 p.m. March 27, at Cuesta for the WSC Coastal meet.