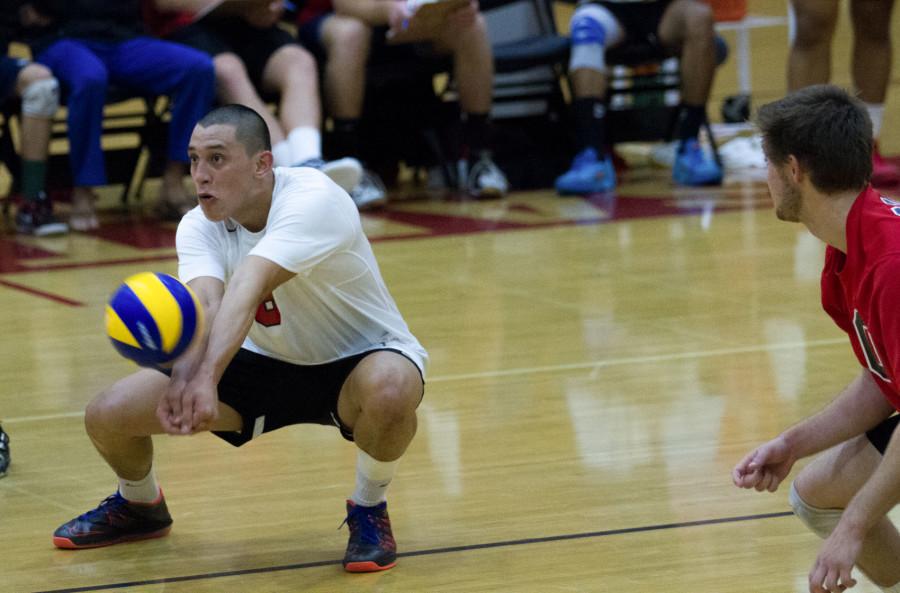 Vaqueros outside hitter Jaiden Pina (No. 8) returns a low volley headed his way during the during the first set in a match against El Camino, Wednesday night, March 11, in the Sports Pavilion on East Campus in Santa Barbara. The Vaqueros played three close sets with scores of 25-22, 25-20, and 26-24 amounting to an overall 3-0 win. Their next home game will be against Moorpark College on Friday, March 13.

Freshman opposite hitter Sean Reyanert (No. 11) was the only bright side in City College’s offense as he totaled 11 kills and four blocks in the loss. Taylor McCluskey (No. 4), the freshman opposite hitter who has been the go to guy on the team so far this season added eight kills, but had eight hitting errors to go with it.

“Sean was really our only guy who had any rhythm in our offense,” said Jones.

Although Reyanert was able to get into a rhythm the rest of the team couldn’t seem to feed off of it and gain any momentum.

In the first set City College called a timeout after falling behind 11-6, following the timeout Reyanert rallied off three straight kills, but each time the Vaqueros cut the lead down to one point El Camino would go on a little run of their own as they never relinquished their lead in the set.

El Camino got off to a hot start in the second set jumping out to a 4-0 lead that they would once again never lose.

It wasn’t until the beginning of the third set that City College held a lead in the match. The entire third set went back and forth all the way until the end. With the score tied at 23-23 El Camino’s sophomore opposite hitter Casey Wood (No. 18) had two straight kills which led to El Camino’s match point.

What kept each set close was City College’s defense, but the offensive errors were too much to overcome. The defense was led by freshman libero Casey Alper (No. 10) who had nine digs in the match.

“Defensively we were solid,” Alper said, “a few calls didn’t go our way.”

There were a few calls made by the referees in the match that favored El Camino and held back the Vaqueros from gaining any momentum.

With City College down 9-6 in the second set McCluskey got a kill and got ready to serve the next play until play was stopped while Wood made an argument to the referee. After the long discussion the referee signaled the point for El Camino which outraged Jones and his players.

On the final point of the match it had looked like City College got a kill to tie it up at 25-25 but the back judge, who looked unsure of the call herself, signaled that the ball was out, thus giving the final point and match to El Camino.

City College will play its next match at 6 p.m. Friday March 13 at Moorpark.