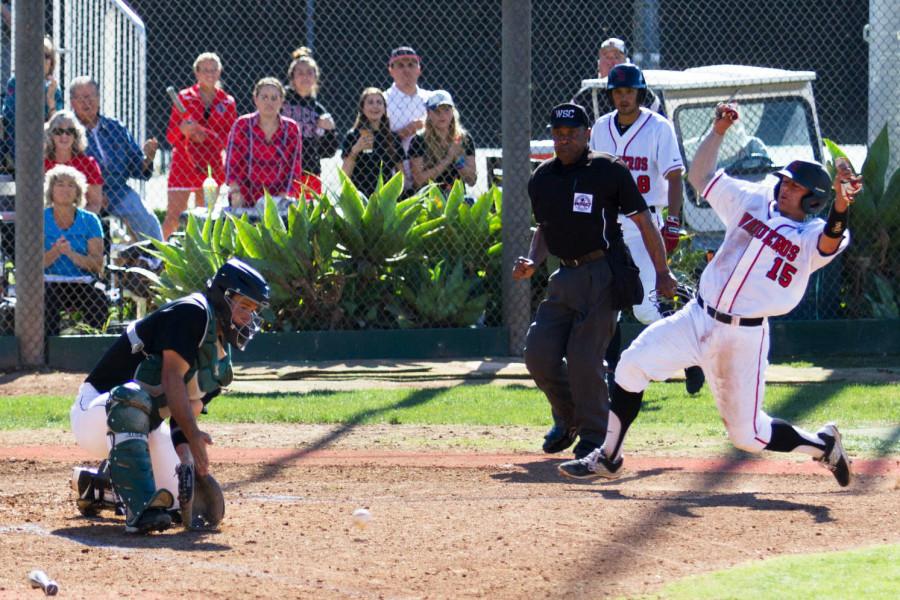 City College catcher James Hill (No. 15) slides in to score a run against Cuesta College, Tuesday, Feb. 24, at Pershing Park in Santa Barbara. The Vaqueros beat the Cougars 4-0.

City College(11-2,4-1) rebounded from its first conference loss of the season, relying on its strong pitching staff to notch a 4-0 shutout of Cuesta College(3-9,1-2) Tuesday night at Pershing Park.

Neither team could muster much offense for most of the game. City College broke open a 4-run second inning, but mostly relied on the right arm of starting pitcher Sean Barry (No.12) who delivered his first complete game shutout of the season. He struck out six Cuesta batters and only allowed two hits on the night.

“He was a warrior out there, from the first pitch to the last pitch,” said head coach Jeff Walker . “He got a shutout. Outstanding job by our defense playing behind him.”

“I’m feeling good. Every week I’m feeling better,” Barry said. “But our defense was just sweet. They are what fuels all of this.”

With the game still tied 0-0, Cuesta’s Kyle Raubinger opened the second inning with single right down the middle to put the pressure on Barry. The right-hander responded by forcing three straight outs, two pop-flies and one on a fielder’s choice at second base.

City College’s offense looked prolific in the bottom of the second inning. First, sophomore catcher James Hill (No.15) hit a one-out single, giving teammate Colby Taylor (No.14) a chance to bat with runners on. Taylor took advantage, slicing a double into right center to score Hill and give the Vaqueros a 1-0 lead.

Then City College called in Payton Milone (No.8) to pinch-hit with the runner in scoring position. Milone delivered a single that just got past a diving Cuesta outfielder to put runners on the corners for City College. Cuesta starting pitcher Alex Fagalde proceeded to walk City College sophomore Spencer Erdman (No.5) on a pitch that was too high, loading the bases for City College. Sophomore outfielder Connor McManigal (No.24) followed up with a booming double to deep right field that would score all City College baserunners and give the Vaqueros a commanding 4-0 lead.

“We knew we were going to jump on him, he was missing a lot of fastballs,” McManigal said.

“I thought I had him on the first pitch, but luckily he threw me another one and I got a hold of it.”

Pitchers from both teams would heat up after this point, never allowing the opposing lineups to get runners into scoring position.

Cuesta would finally get a chance in the top of the seventh inning. Cuesta’s Raubinger reached first base again courtesy of a fielding error. Then a wild pitch by Barry hit Cuesta sophomore RJ Hassey to put runners on first and second with only one out, giving Cuesta its first chance to eat away at the City College lead. A fielder’s choice on the next at-bat left Barry facing Cuesta’s Blake Chandler with two outs and runners on second and third. Barry rose to the occasion, striking out Chandler and leaving Cuesta’s runners stranded with a zero still on the board.

Both offenses continued to sputter until Cuesta took one final shot at Barry in the ninth inning.

Barry walked the first Cuesta batter and then hit the second, giving Raubinger another at bat with two runners on and the tying run on deck. Barry snuffed the Cuesta rally, forcing Raubinger into a double play and escaping the jam. Barry then retired the final batter and completed his shutout.

When coach Walker was asked if he was worried after Barry allowed the first two runners to reach base in the ninth, he showed complete confidence in his starter.

“He deserved the last batter, he had got us this far,” Walker said. “ He earned it and deserved the shutout.”

City College will see Cuesta for the second game of their two game series at 2 p.m. Thursday, Feb. 26, at Cuesta.