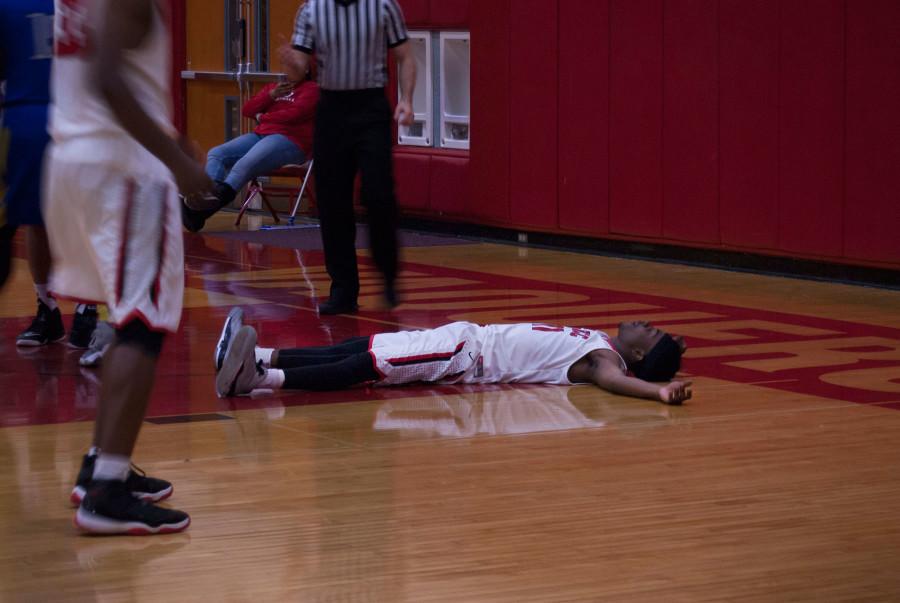 City College guard Justin Holden (No.11) takes a hit from an Allan Hancock College player during the game, Wednesday, Feb. 18, in the Santa Barbara Sports Pavilion. The Vaqueros lost 44-63 to the Bulldogs.

“This game brought out many memories and good times from here,” sophomore Thomas Walker (No.44) said.

The Bulldogs were up 39-20 at halftime. City College played much better in the second half, but the deficit was too much to overcome.

“First half was tough, we had 14 turnovers against us and I think we lost 16 points to that,” head coach Morris Hodges said.

First half started out hard for City College, going down by 4 points right away after a few early fouls. The Vaqueros first score of the game was made by sophomore Alex Koutroubis (No.41) after an nice spin move leading to a great layup.

City College’s defense struggled throughout the first half, and after a few turnovers it quickly became 16-6 in favor of the bulldogs.

“They had high pressure on us from the start,” Walker said. “They got a lot of turnovers which was tough.”

The Vaqueros couldn’t find their rhythm and it took until minute 15 before we saw some tempo from City College. City College got a nice 3-pointer from freshman Justin Holden (No.11) just before half.

In the halftime break City College talked over its tactics and started playing tougher defense. And that payed off.

With a curling 3-pointer from Lofton and a two steals from sophomore Alonzo McCain (No.23), City College started heating up five minutes into the second half.

It was now Allan Hancock that was under pressure, and to the crowds cheering kept City College playing strong.

With two quick points from Walker the Vaqueros had closed the gap to only six points with 10 minutes left in the game, 46-40.

“In the second half they (City College) came out strong and played tremendous.” Hodges said. “The starters ran good and got points. With some scoring the team gets more energized and that led to great defense, more scoring and positive thinking.”

That great start took a lot of energy from the starters, and Hodges had to make a 4-player substitution.

After that City College lost its focus and committed a lot of fouls which led to easy points for Allan Hancock. With five minutes left, the Bulldogs went into a slow and methodical offense, building the lead back into double-digits.

The teams were even in terms of scoring in the second half, scoring 24 points apiece. But the poor first half was too much for City College to overcome.

With a record of  4-19 and only one game left for the Vaqueros, Hodges admits it has been a tough season.

“We had an inexperienced team and next season they have to pay more attention to detail.” Hodges said. “We didn’t lack the physical aspect of the game, it was more mentally.”

City College also says goodbye to three players (Walker, Koutroubis and McCain) going away to four-year-colleges, and this season would have been even tougher without them Hodges said.

“They were all tremendous in this season and I couldn’t ask for more from them,” Hodges said. “I’m proud of how they battled through this tough situation without complaint and that shows how good character they have.”