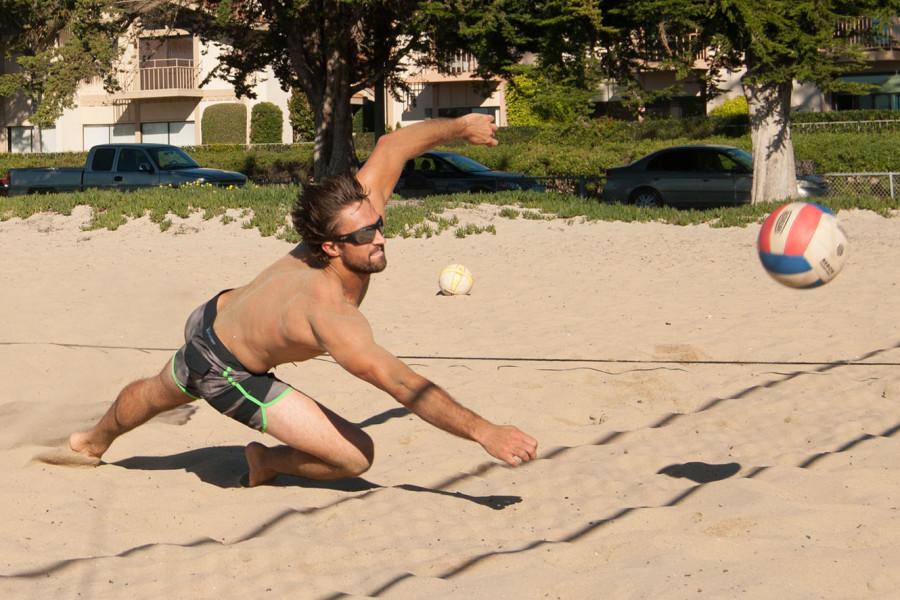 Matt Jones, head coach of City College’s men’s volleyball team, does training of his own at East Beach, Friday morning, Feb. 13, in Santa Barbara. Jones set multiple records as a four-year starter for the Harvard men's volleyball team, and is now in his second season coaching the Vaqueros.

He was a four-year starter for the Harvard volleyball team where he earned a Bachelor’s Degree in applied mathematics, and now Matt Jones is in his second season as the head coach of the City College men’s volleyball team.

Jones was a co-captain of the team his senior year at Harvard, and was named a first-team All-Eastern Intercollegiate Volleyball Association choice as he led the team to its first national ranking.

“It’s definitely nice having him have experience at a high level and him passing on his experience,” said Matt Ball, a current member of the City College volleyball team.

Jones grew up in San Diego, and was being recruited by a few schools in southern California, including the University of San Diego. Harvard began recruiting Jones late in the process but once they did there was no doubt about what school he would attend.

“Looking back it should have been kind of a no-brainer given where I was at,” Jones said. “Once they started recruiting me I definitely got super interested.”

Jones decided to study mathematics because it had always been his strong suit.

“Because I suck at reading,” Jones said when asked why he chose math. “It was challenging, but I liked it.”

Jones had an exceptional volleyball career at Harvard. He is still the all-time leader in kills (1,218) and aces (97) for Harvard.

During his time at Harvard, Jones decided that he wanted to pursue a career in volleyball. The year after he graduated Jones went overseas to play in Luxembourg.

“It wasn’t until the summer after I played overseas, when it looked like I wasn’t going to have a chance to go back, that I really started to pursue coaching,” said Jones.

While Jones is focused on the team he is also pursuing a career in beach volleyball. One reason Jones took the coaching job at the City College was so he could continue playing beach volleyball.

“When they offered me the job here it was just a great opportunity to come head coach a program,” said Jones. “And it also allows me to still play beach.”

Later this year Jones plans on playing in a California Beach Volleyball Association tournament, as well as qualifier tournaments for the American Volleyball Professionals in an attempt to make the professional circuit.