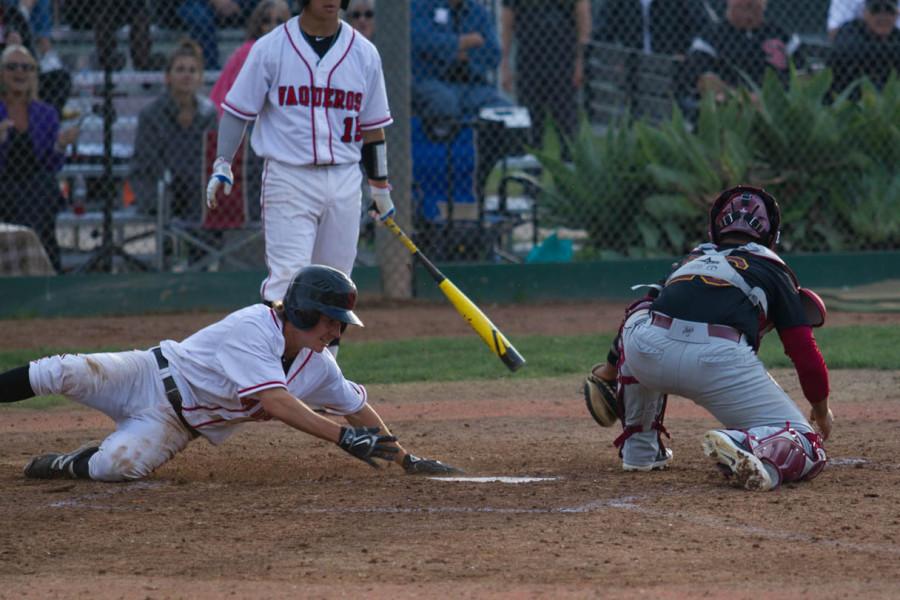 Spencer Erdman (No. 5) slides into home on a wild pitch, tying the game 4-4 against Glendale, Thursday, Feb. 5th, 2015, at Pershing Park in Santa Barbara, Calif. After extra innings, the City College went on to beat Glendale 6-5.

The game was finally decided in the bottom of the 12th inning when City College sophomore infielder James Brakka (No.9) sliced a single into shallow right field that brought in fellow sophomore Connor McManigal (No.24) for the game-winning run.

“I was looking for something to drive,” Brakka said. “Something good that I could hit out of the infield.”

Sophomore right-hander Justin Bruce got the start for the Vaqueros and played until the eighth inning allowing four runs on only three hits. Glendale had only four hits on the night but managed to keep the game close thanks to home runs from sophomores Raul Camas and Randy Medellin.

“This is a tough group,” Walker said. “They’re battle tested from last year and sometimes it’s good to get punched in the face a little bit.”

Glendale got out to a 2-0 lead after the home run by Camas in the fourth inning. But City College fought back to tie the game and take the lead on a fifth inning fielding error that brought home sophomores Matt Henderson (No.6) and Spencer Erdman (No.5). Both teams struggled with fielding errors throughout the game.

“Some guys were just trying to do too much and getting outside of their game,” Walker said.

The game was brought to a standstill in the bottom of the seventh inning when Glendale became fixated on trying to pickoff Erdman from first base. Glendale sophomore DJ Milam stopped throwing pitches and instead threw to first despite Erdman sliding in safe every time.

“That was unbelievable,” Brakka said. “It just slows the game down a lot. But you have to just focus, and not let them dictate what you do.”

The plan eventually backfired when a botched pickoff attempt resulted in Erdman scoring for a second time, giving City College a 4-2 lead going into the eight.

But Glendale would tie it again in the top of the eight with a two-run homer from Camas, prompting a pitching change for City College. The teams would go scoreless through the ninth and force extra innings.

City College had its back against the wall down one run in the bottom of the 11th. But the team forced one last inning with a single from pinch-hitting sophomore Payton Milone (No.8) that scored sophomore Brandon Evans (No.13) on a fielder’s choice and tied the game.

“It just took mental fortitude,” Brakka said. “You just have keep going at it and score the runs at the end.”

City College closer Kit Larson (No.18) kept Glendale off the scoreboard in the top of the 12th, putting City College in position to put away a game that lasted nearly four and a half hours. With one out and runners on second and third, Brakka singled to right and sent his team into a celebration of their fourth win in just as many games.

City College’s next game is a 1 p.m. doubleheader on Saturday, Feb. 7 at Saddleback.