Professional athletes making their money by the zeroes 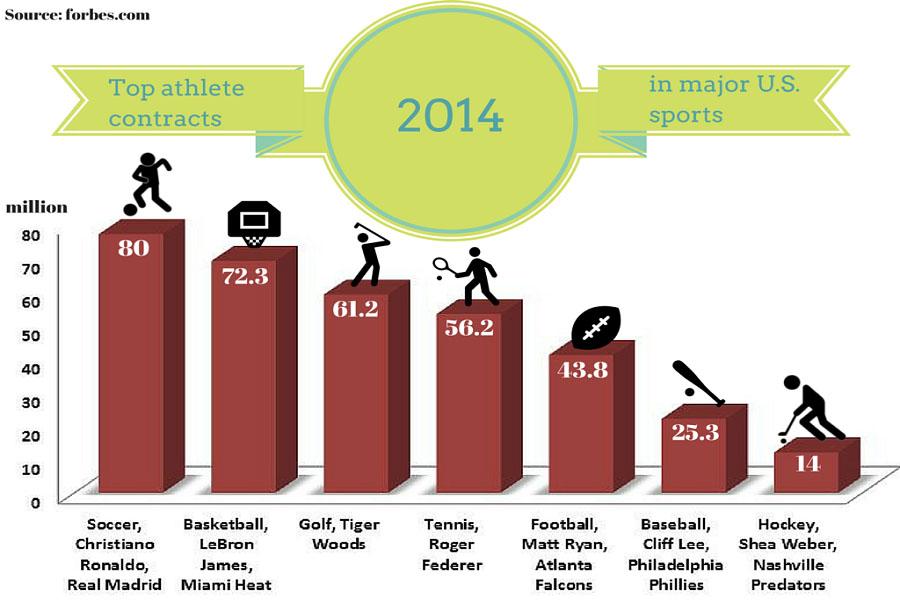 2014 will close out as a year highlighted by scandals in sports, but underlined by record breaking contracts for athletes.

And if we have learned one thing, sports is what makes the world go round. Sports are huge. How huge? Well to put it into perspective, the total American sports industry is worth $422 billion annually.

If you are a fan of sports, you may have heard about the contracts that have been handed out this year. Highlighted by Miami Marlins slugger Giancarlo Stanton’s 13-year $325 million contract, the “S” in “Sports” is slowly growing into a money symbol.

The talk about overpaid athletes started in the NFL. A record-breaking four-year $56 million deal for the animated corner Richard Sherman of the Seattle Seahawks made all major headlines. One week later Joe Haden of the Cleveland Browns signed a five-year $68 million deal one-upping Sherman. But Arizona’s Patrick Peterson topped them all a month later with a five-year $70 million deal.

One off-season. Three record deals. Money seems to be floating around.

The issue of athletes potentially getting over paid is now at the forefront of the media. People are suddenly realizing the magnitude of these lucrative deals, and in return are outraged that these athletes are getting paid millions and millions (and millions), where traditionally salary was a reflection of ones work.

For instance, teachers have a strong argument to be valued as the most economically important occupations, as they are crafting the future working class of the world.

But the counter perspective is that while athletes entertain fans from all around the world, teachers are only tending to one classroom. And sprinkled in those seats stationed in front of that blackboard, are a select few future athletes that will, one day, outgain their dear teachers exponentially.

Take Kobe Bryant for example. The 18-year veteran signed a two-year $48.5 million contract in 2013. So each basket Bryant scores earns him near the equivalent to the average classroom teacher’s yearly salary.

But an athlete averages just short of five years in his or her sport, where teachers will have their whole life to make their money. So the athlete liability is higher, and it factors in.

Let’s take a small step back. This contract that Stanton has signed, a record breaking one, has caused a stir in the sports world.

People are curious; how much is the athlete really worth? Well the reality, is that the market for sports is much higher than the educations system, police force, firefighters, and US military. It’s plain and simple. It seems unjust. But it’s the world we live in.

If you’re against these new super-sized contracts, turn off your TV’s. Don’t go to games. Don’t bet on sports. Don’t buy merchandise. Because the millions of people who spend money on sports are supplying the basis for mega deals.

Sports is entertainment. Pure and simple.

The athletes also live a more expensive life. With more money comes more money owed. It’s unrealistic to compare the athlete’s expenses with our own. They don’t live in 2,600 square ft. houses. They have expensive car payments. And mortgages. Yes, by signing his name Stanton can afford 43 Lamborghini roadsters, and he can afford 250 rolls of 22-karat gold toilet paper. But the Marlins think he’s worth it.

I mean for crying out loud the Marlins were purchased in 2002 for $158 million, according to Forbes. Less than half of the Stanton deal.

Although according to Forbes, there is at least one thing that assists the Marlins here, and that’s that they (and every other owner in the league) have been implanted with revenues from the new national television contracts with FOX, TBS, and ESPN that kicked in this year.

The new extensions raise total revenues from $711.7 million to $1.5 billion annually. That’s an increase of $788.3 million. Divide that by 30 teams, and it gives an additional $26 million for each owner in the league. That alone could cover Stanton’s yearly contract of 25 million.

But the questions still remain: when will a cap be reached? Will the ever-rising salary of an athlete continue to do so? Will we see the first billion-dollar athlete? At what point is it too much money?

There may never be a cap. But one thing that can change is the way that money is used. Maybe the athletes will have to sign a contract with a cap on salary, and every dollar in excess to the team’s total payroll will be taxed back into the communities it came from. Stanton doesn’t need to make $68,000 a day. No one really does.

But the money has to go somewhere. It might as well go to the players that people pay to see. Not the owners and the GM’s. No one is paying to see the GM drinking champagne in his luxury suite. They pay to see the superstars.

A lot of organizations giving back to the community exist already. All major sports donate a lot of money to various local and national causes and foundations.

That’s just how the game is.