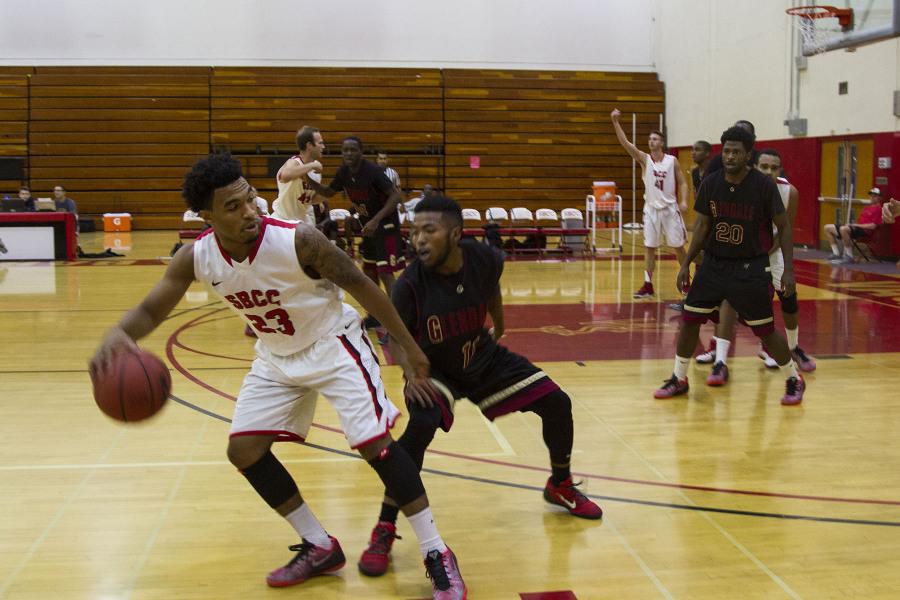 City College freshman guard Sean Keyes (No.33) had 15 points and four rebounds, and freshman forward Cody Williams(No. 45) added nine points including four free throws in the final 30 seconds to seal the win for the Vaqueros.

“It felt great putting two good halves together,” said head coach Morris Hodges. “We started off great, and they fought back. But we made some substitutions and those guys were critical to stop the run and put us back up.”

Glendale opened up the game shooting 1-12 from three-point land and 3-13 overall to allow City College to take a 15-8 lead midway through the first half, forcing Glendale to take a timeout to regroup. The break proved effective as Glendale scored five quick points to cut the lead to 15-13.

The first half ended in a flurry of three pointers from both teams.

City College freshman forward Amir Casseen (No.42) hit two from long-distance and Williams added one of his own to extend their lead to 26-15 with 2:23 remaining in the half. Glendale forward Christopher Hines struck back with two three-pointers of his own to cut the deficit to 28-21 at halftime.

City College struggled to score entering the second period, missing their first seven shots and allowing Glendale to take a 31-28 lead. Then Keyes provided a much needed offensive spark, scoring nine points during a 14-4 run that put City College up 42-35 with seven minutes remaining.

“I’m just following through with the flow of the offense when the game comes to me,” Keyes said. “My teammates did a good job giving me my spots and allowing me to get open.”

Glendale made a run to bring themselves within two points in the final minutes, but City College made all six of its final free-throws to earn its first victory of 2014.

“I feel like the weight is off our shoulders. We had a hard week of practice, and everybody was hungry for a win,” Keyes said. “We deserved it.”

City College will play its next game at 5 p.m. Saturday, Dec. 6 at home.