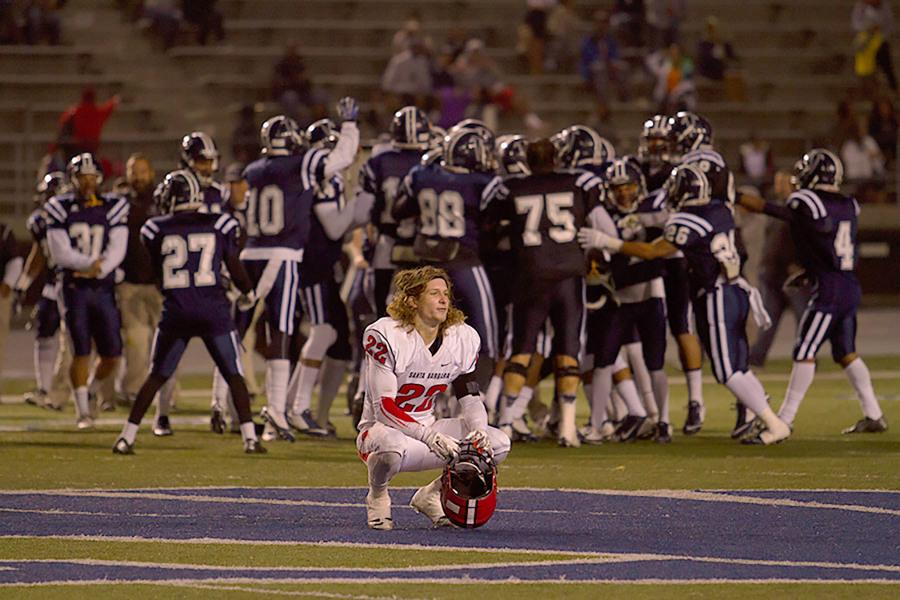 City College’s Tyler Higby (No. 22) crouches down seconds after losing to Cerritos College in the Golden State Bowl on Saturday, Nov. 22 in Norwalk, Calif. The Vaqueros could not hold on to the lead in the closing minutes of the game losing 22-19.

City College came up just short in the Golden State Bowl against Cerritos College falling 22-19 to end its season 7-4.

The Falcons out gained the Vaqueros 306-188 in yards, as well as doubling their first downs. But the coaches saw a lot of heart in the team, and are convinced they left everything on the field.

“Absolutely nothing negative about this game,” said head coach Craig Moropoulos. “We didn’t win the game but the way these guys were fighting at the end and playing hard, getting after it. I’m just extremely proud of this team”

The game started positive for City College, forcing a three-and-out on the opening drive of the game. That set up a 10-play drive ending with a five-yard touchdown pass from Brandon Edwards (No. 8) to Claudio Santos (No. 87) to go up seven early.

Later in the quarter, a high snap sailed into the end zone and City College jumped on the ball scoring six putting the team up 13-0. The momentum was all Vaqueros until the game’s rushing leader Devante Carter (No. 9) scored from five yards out for Cerritos. He finished the game with 134 yards on 21 carries.

Half time, City College had the advantage 13-7 behind Cherokee Cunningham’s (No. 13) rush attack totaling 35 yards on seven carries.

Second half, the momentum switch was evident and Cerritos took control outscoring City College 15-6 in the final 30 minutes. The special teams MVP for the Vaqueros was punter Mitch Wishnowsky (No. 39) who executed a huge third quarter fake punt for the red and black. On the day he racked up 326 yards on seven punts averaging 46.6 yards per attempt.

But the play of the game came on 4th down for Cerritos down for the Falcons in a score or go home situation. They did just in their efforts scoring on a diving play from Justin Caines (No. 18). After a two point conversion,  City College was down a field goal with four minutes remaining in regulation.

City College had two more chances to tie the game but could not convert falling by just three points.

The season was one for the books, reaching a bowl game for the first time in 17 years is a win in itself.

But that was the only win on the day for the Vaqueros, who loaded the bus for the last time of 2014.

With potential for 57 players to return next season the Vaqueros will look to repeat on a bowl bid and look for their first bowl victory since 1982.