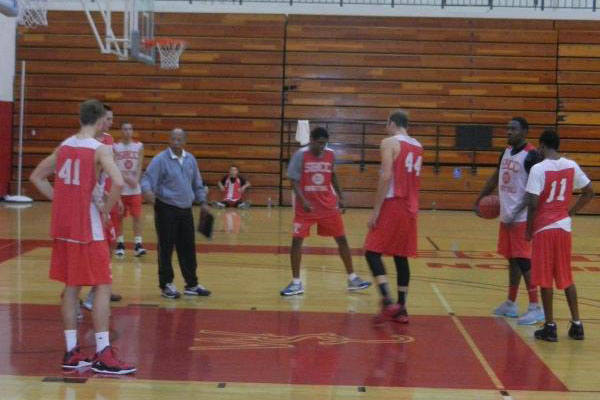 Entering his 25th season at City College, Hodges looks for leadership from sophomore point guard and returning starter Alonzo McCain (No. 23). Forwards Alex Koutroubis (No. 41) and Jared Moore (No.54) join McCain on the list of returners.

“I think we’ll have some good inside play, which we haven’t really had in a while,” said Hodges. “We have some bigs who can give us some scoring punch inside. We also have a few perimeter guys who will give us some outside shooting.”

McCain has taken notice to the new team and its progression from last season. The 5-foot-8-inch guard from San Bernardino sees a whole new opportunity for the Vaqueros this year.

“This year’s team has more heart and a better big man play on the inside,” said McCain.

With a young team in City College, Hodges said he is confident that returners like McCain can help him guide the younger players and help them benefit the group in a big way.

“I think Alonzo will provide leadership and good solid play at point guard, said Hodges. “Justin Holden will back him up and he needs some experience at this level.”

In the past, City College has been outsized on the boards. As a recruiter, height is key, and this season is one where the staff can start implementing more scores inside the paint. One who stands out is first year player sophomore Thomas Walker (No. 44).

The 6-foot-7-inch center from Aliso Viejo, Calif. might just be what City College has been missing. Accompanying him down low is freshman Cody Williams (No. 45) from Phoenix who has potential in his coaches eyes.

“Another big who will be good as he develops is Cody Williams,” said Hodges. “When he gets acclimated to this level, I think he’ll be a strong player.”

With eleven of its 14 players being new to the team, the Vaqueros face adversity in that aspect. Being a two year program, and turnover rates being so high, that’s no new challenge for City College.

McCain responded to the challenge faced by the team simply.

“I think experience (is our biggest flaw), but I believe we have a team that has the will to get better,” he said.

Other key add-ons include big man Jonathan Montez (No. 50), Sean Keys (No. 33) and Ty Cleland (No. 21). Hodges is confident in Montez and praises him as an ”all-around scorer who can step out to 15 feet and shoot, plus he’s a good rebounder.”

6-6 Jonathan Montez, Sean Keys and Ty Cleland. Walker played for Irvine Valley is 2012-13 and figures to be strong on the inside along with Montez. Hodges says Montez is “a good all-around scorer who can step out to 15 feet and shoot, plus he’s a good rebounder.”