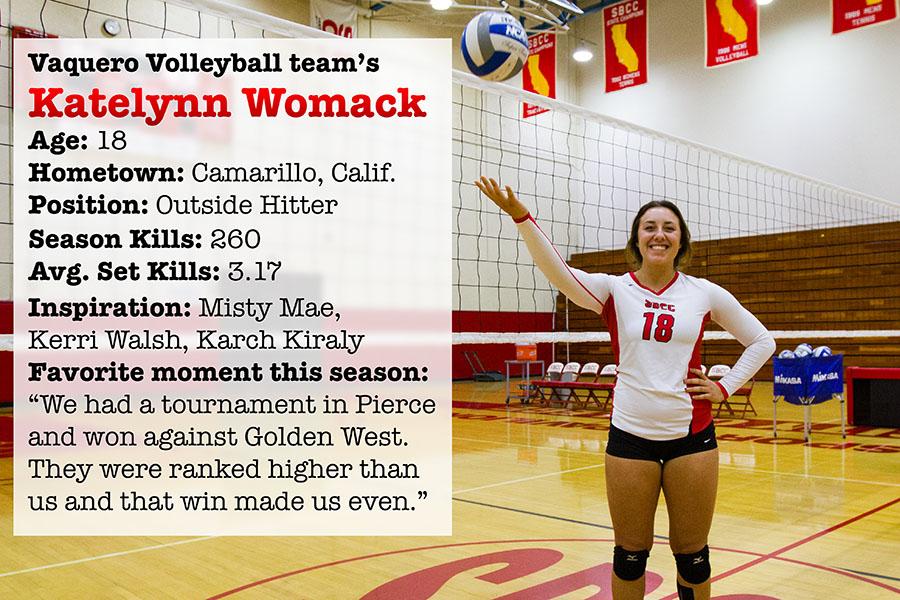 Outside hitter Katelynn Womack, who sports number 18 for the red and black, is what her teammates would call a liberator and her opponents would label a captor.

She can beat you in an array of statistics. Her season total of 260 kills—82 more than anyone else on the team—places her sixth in the WSC. She averages 3.17 kills per set, which also leads the team as well as ranks her fifth in conference and her 269 points is 94 more than next closest player for the Vaqueros.

And even though she is an outside hitter, she still has managed to record the third most solo blocks on the team (10).

So it’s safe to say the five-foot-eight freshman is showing dominance in her first season at City College.

“It’s amazing how explosive she is when she unloads,” said head coach Ed Gover. “It just looks like when someone dunks you know.”

Being the type of player that affects the game as much as Womack does is not easy. She can be hanging out on campus, at the grocery store, in class daydreaming or preparing for her nursing career.

But the game doesn’t wander too far from her mind.

“I just have to keep on working hard. I can’t stop,” Womack said. “Even on my off days I make sure I’ll do something like running on the beach, working out, touch a volleyball, anything.”

Her passion for volleyball wasn’t always as serious as it is now growing up in Camarillo, California. Before the eighth grade she tried out water polo, softball, tennis and soccer. But when she found volleyball and made it onto her high school team she fell in love.

“Starting to play for my High School team boosted my confidence so much and I knew I could (eventually) be better,” Womack said.

Her calling of volleyball and a dream to become a nurse lead her 44 miles north to the beach town whose volleyball program was geared to compete up and down the central coast. City College couldn’t be happier to have Womack as a part of its young team, which carries nine first year players.

“Katelynn is a great teammate and is always trying her best everyday,” said teammate Madelon Leiphardt (No. 7).” She has a great personality that people enjoy to be around.”

It’s that personality combined with Womack’s ability to perform on the court that has steered City College to this season’s continued success, and she has goals of her own.

In short term the 18-year-old aims to help advance her team to the final four in California. But looking even more forward, Womack seeks life at a four-year-college with D2 volleyball and a solid nursing program.

“I want to be a nurse when I’m done school,” Womack said. “We’ll see where life takes me but to play volleyball in any D2 league in California would be awesome.”

It’s still a long way to go but for the freshman the future looks bright. As long as her work ethic stays consistent, her coach envisions a long career ahead of Womack.

“She’s very competitive,” said Gover. “She may have a future in beach volleyball as well.”

And for her coach, the pleasure to have a specimen of such caliber on the team is all his.

“I believe that if she wants, she can step it up. She got a very good volleyball IQ,” said Gover. “She can play both in the back and the front and I think she can be an amazing beach player. She can get a lot of doors open.”

With another three semesters left at in Santa Barbara, Womack has plenty of time to open those doors. And with the continued support from her mother who is a great role model and sends her a good luck text before after every game, Womack says feels very confortable in her new lifestyle.