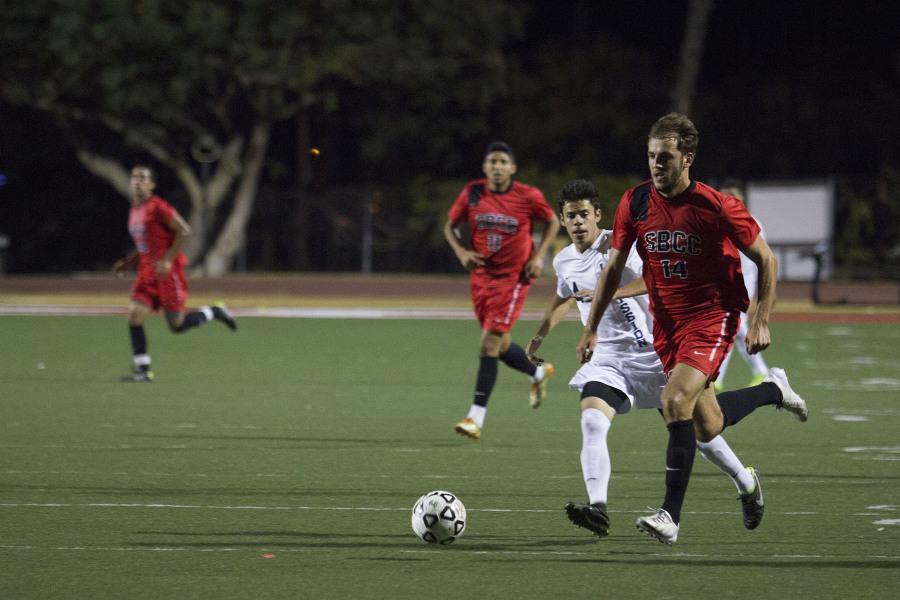 Santa Barbara City College defender Albi Skendi (No. 14) takes the ball down the pitch during the Vaqueros game against LA Mission Tuesday, Nov. 4 at La Playa Stadium in Santa Barbara, Calif. Skendi scored the second goal in the final minute of play to tie the game.

City College (5-4-4) scored two second-half goals including one in the final minute to overcome a 2-0 deficit and tie LA Mission (7-2-4) 2-2 Tuesday night at La Playa Stadium.

The Vaqueros were less than a minute away from a tough loss at home when freshman forward Albi Skendi (No.14) notched the game-tying goal. Skendi muscled past Eagle defenders and connected with a lob pass from teammate Richard Caine (No.3).

“We showed a lot of heart to come back,” head coach John Sisterson said. “Albi was great at the end. It’s a shame we didn’t have longer to play, or I think we could’ve won this one.”

City College looked strong in the opening minutes, displaying good ball movement at the point of attack. But unable to capitalize on the early scoring chances was City College, and LA Mission took the opportunity to seize the game’s momentum.

In the 18 minute, LA Mission sophomore Ericson Penate (No.17) scored the first goal of the game on a free kick from 26 yards out. Penate fired a looping shot around City College defenders and just past the diving hands of City College goalkeeper Oscar Haard-Thelm (No.00). It was the Eagles first shot on goal.

City College would almost tie the game three minutes later, but Caine’s header would go wide left. It would be the last real scoring chance for either team in the first half.

LA Mission came out aggressive in the second half, and it paid. In the 55 minute, Penate made a hard shot that was saved by Haard-Thelm, but the goalkeeper could not hang onto the ball. Eagle sophomore Antonio Robles (No. 20) was there to put home the rebound, extending the LA Mission lead to two.

But City College would not give up. Coach Sisterson rotated some of his players, including switching his usual defender Skendi to play forward for the final 30 minutes.

The rotation would spark a strong finish for City College. In the 64 minute, freshman midfielder Enrique Fernandez (No.8) deflected a shot off of LA Mission defenders. The ball ricocheted straight to fellow freshman midfielder Erik Winnberg (No.35), who gave the Vaqueros it’s first goal of the night.

City College did not relent until the final whistle, and tied the game during injury time. With LA Mission defenders desperately trying to clear the ball, Caine somehow managed to lob a pass to Skendi, who connected with his left foot and tied the game.

“I turned around and saw the goal, I don’t even know how I scored,” Skendi said. “I’m the worst at volleying the ball on the first time, but we needed it.”

City College plays their next home game at 2 p.m. on Tuesday, November 11 at La Playa Stadium.