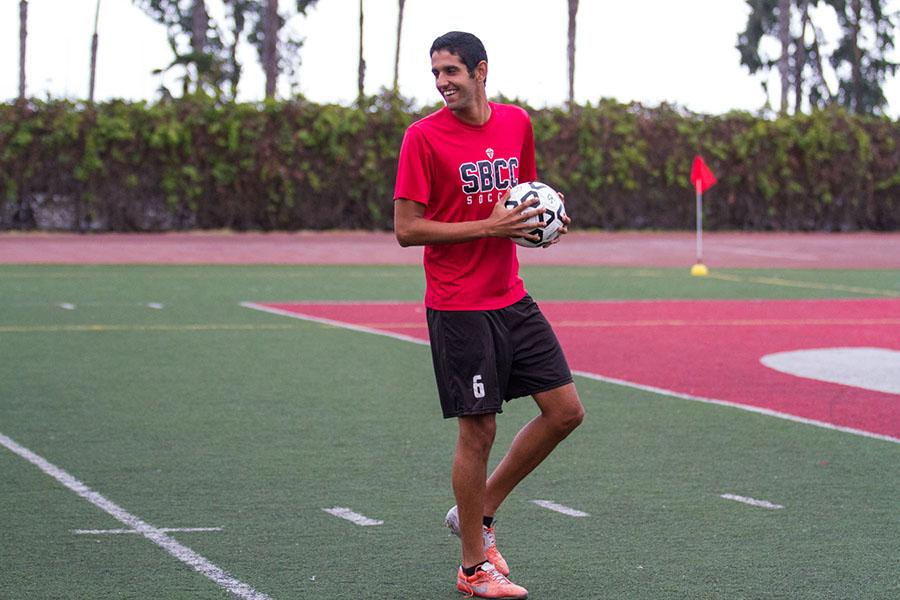 International student Mehdi Badache from Tunisia at City College’s La Playa Stadium, Tuesday, Oct. 14, in Santa Barbara, Calif. Badache is a sophomore, who is leading the team in goals (7), sitting third in conference.

It’s a Tuesday afternoon, and Mehdi Badache is juggling a soccer ball in front of a Channels photographer on the soccer pitch at La Playa Stadium.

Badache, 23, admits he isn’t used to posing for the camera. Yet the 6-foot-6 Tunisian soccer player appears relaxed and confident throughout the session, never showing the hesitation of a person who is out of his element.

This is probably because Badache is no stranger to adapting to a new environment. Three years ago, Mehdi moved from his native African country to the United States so he could pursue a future in mechanical engineering. He does not speak five-star English, and spent his first year in San Francisco learning the language of his new home. It was during a trip to visit friends in Santa Barbara that he discovered City College, and it was clear to him that this would be the right place to begin a new chapter of his life.

“I thought it was amazing, like a postcard,” he said. “I knew this was my next stop, and I moved right away.”

Badache later decided he would join the soccer team at City College, despite the fact he had never played organized soccer in his life.

“Back home I played with my friends,” Badache said. “We would play in a small field, maybe 18 yards long, just for fun. Maybe you play for a bottle of coke or something.”

The soccer field at La Playa Stadium spans 118 yards, a far cry from the lots Badache played in back home. But that distance could not intimidate a young man who has already traveled over 6,000 miles to pursue his dream.

Badache began the 2014 season as a defender for the Vaqueros. His play was solid, but his coaches saw greater potential in the young man. Just before conference play began, head coach John Sisterson decided to switch Badache to the forward position.

“We had been looking for somebody to play up front,” said Sisterson. “When I suggested Medhi to the other coaches, they all said ‘…What?’”

Once again, Badache would thrive in an unfamiliar situation. He has notched seven goals in his first six games at forward, quickly becoming the team’s leading scorer, and sitting third in the Western State Conference for goals.

Mehdi’s mother is a journalist, and his father is opening his own pharmaceutical business back in Tunisia. His father pays to stream City College soccer games on his computer, even when it means staying up until 3 or 4 a.m. to watch his son play. He talks to his mother every day on Facebook, and credits them for his success.

“My parents are my inspiration,” Badache said. “Everything I do is for them. That’s how it is in our culture. I just want to make them happy and proud of me.”

This is Badache’s final year at City College. He says he hopes to obtain a scholarship to a four-year college so he can get his mechanical engineering degree while still playing the game he loves. Once more, he will move on to an unfamiliar place.

But Badache has proved he is no longer afraid of change.