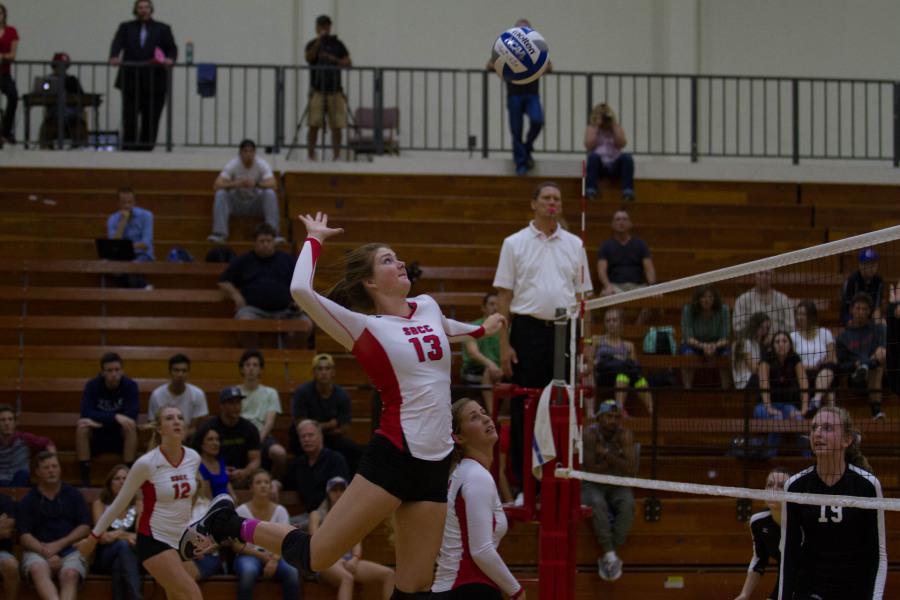 “It was a good game,” said Head Coach Ed Gover. “We have a lot of confidence.”

The Vaqueros showed a great amount of that confidence in at the Sports Pavillion, but it took a while for it to kick in.

City College and Moorpark College battled back and forth, trading points in a slow start to the game.

When the scoreboard read 4­-4 City College started to heat up and after some nice kills from Katelynn Womack (No 18), and Madelon Leiphardt (No. 7) gave the the Vaqueros some breathing room up 12­8

“We had a good week of practice and a lot of energy,” said Womack. “Especially in the beginning.”

City College did not give Moorpark a chance in the first set, winning 25-­13.

The loud cheering of the crowd immediately heated up in the second set, and with a five point streak. City College managed to burn one of Moorpark’s timeouts when they improved the score to 6-4.

The time out did not help at that point and with great team play from the Vaqueros, they yet again gained a comfortable lead, 18-­11.

With more solid play from Womack in the second, set she pointed out that it was the team who came together and produced the “team win.”

Up four points nearing set three, City College collected the kill and the momentum was in heavy favor of the home squad up 2-0.

In the start of the third set Moorpark gave all they had gaining their first lead of the contest 6­-5. But with players like Womack and Leiphardt, the Vaqueros where unstoppable.

“Katelynn is a very talented player with a lot of skills,” Gover said “I’m proud of her.”

Vaqueros and the Raiders traded points with each other, but City College pulled out the 20-15 win, adding on to their streak.