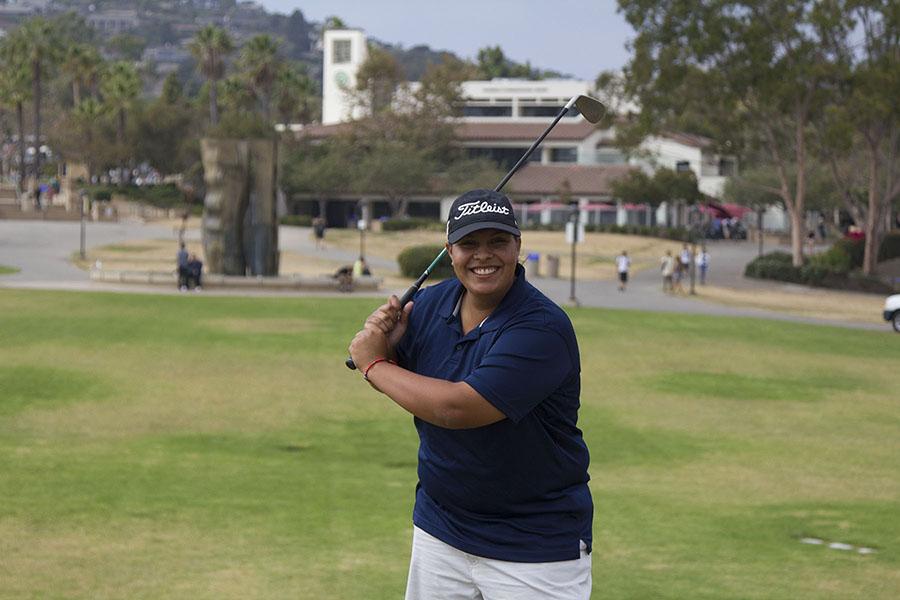 Santa Barbara native Saralisa Ortega, 20, is team captain of the Vaquero women’s golf team and is ranked fourth in the Western State Conference, at West Campus, in Santa Barbara, Calif. 'I have grown to have a lot of passion with the game over the years,' said Ortega. 'I love to play golf.'

For the 2013 California State Championship golf team, six of the seven players have moved on from City College golf.

But one emerging star remains and has switched her role from team component— to team captain.

“(Saralisa) has a lot of integrity,” said head coach Chuck Melendez. “And with her experience, (picking her as the team captain) was an easy choice.”

Santa Barbara local and City College sophomore Saralisa Ortega has taken lead of the young women’s golf team. Being the sole returner from last year’s State Champions, Ortega has picked up right where she left off — with strong performance.

This season Ortega has an average score of 77 that puts her at fourth in the Western State Conference. Numbers like these can foreshadow a promising career ahead of her beyond the Junior College level.

“With a little more time on her academics she can go a long way,” said Melendez. “A lot of schools will be interested in her.”

Ortega has set up goals for the future including a four-year university, aims on a scholarship, and eventually the LPGA tour.

She’s currently a kinesiology major but is thinking of switching to a major in law and society/criminal justice.

But one thing will always remain certain for Ortega: she will be playing golf.

“I’m aiming for a scholarship to a university for golf,” she says “and I can actually see myself on the tour later on.”

Ortega goes through nine units of studies combined with several hours of golf every day. No one forced her into this hectic schedule, but with great love for the sport Ortega embraces her opportunities.

“I have grown to have a lot of passion with the game over the years,” said Ortega. “I love to play golf.”

Growing up in Santa Barbara and attending Santa Barbara High School, City College was an obvious choice for the 20-year-old. That turned out to be a favored decision not only for Ortega, but for Melendez’s golf team as well.

“She’s an excellent player and has a top of the line personality,” said Melendez. “One of the best players I’ve had.”

With a smile on her face, she said that it was her dad who introduced her to the sport when she was only four-years-old.

“My dad has always been a golf person,” said Ortega. “He taught me how to play the game very well.”

Starting at such a young age, Ortega has been around the links for a long time. She has been fortunate enough to earn awards and trophies including last year’s prolific State Championship title with City College.

“I felt so exited and I knew we deserved it,” said Ortega. “We practiced everyday for that win.”

City College is now sitting second in the Conference. If the team can hold it’s position, City College will go through to SoCal regionals.

“I’m doing my best every time on the course,” said Ortega. “And I want to help the team win.”