No. 18 SBCC football heats up at home; extends win streak to four 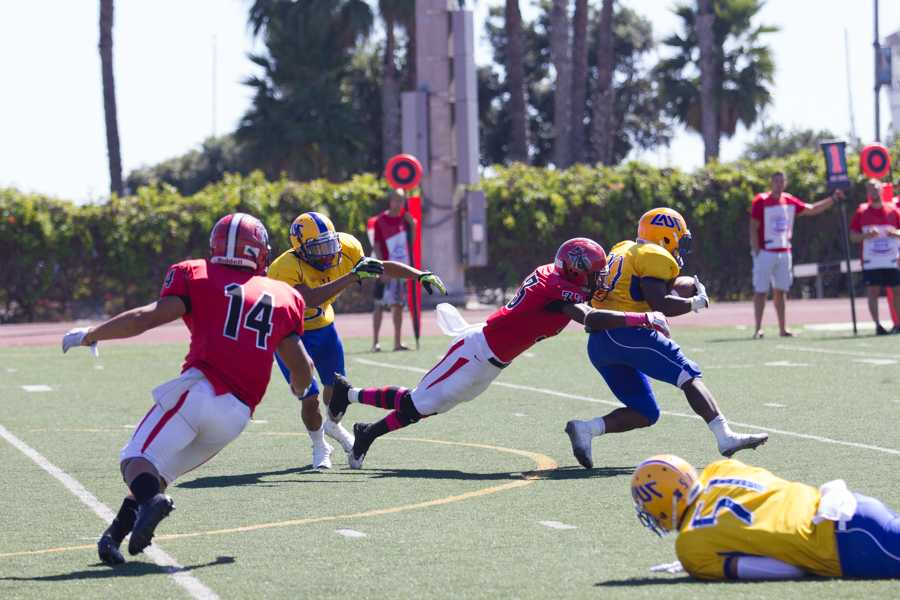 Freshman Malik Williams (No. 33) makes a tackle on LA Southwest College’s Latrell Flowers (No. 20) at Santa Barbara City College. Williams and the Vaqueros improved to 4-1 with the 30-18 win at home.

No turnovers and great field position all day helped fuel a big 30-18 Pacific League win for Santa Barbara against LA Southwest in near triple digit temperatures.

The second quarter started with a quick score by City College when Brandon Edwards (No. 8) found Nicholas Rhode (No. 15) from 17 yards out for Rhode’s first touchdown of his career.

“We do a good job in the red zone, really capitalizing.” Edwards said.

After impressive second quarter defense came from the Vaqueros, City College had the ball with just over eight minutes left in the half. Edwards controlling the ball movement found Elijah King (No. 12) for a 16 yard score and the Vaqueros found themselves up eight.

After a missed extra point by Blake Levin (No. 41) City College saw themselves up 7 with seven minutes to go. But Levin made up for his missed extra point with a 40 yard field goal at the end of the half, Vaqueros marching in to the locker room up 10 at the break.

In the second half, the LA Southwest offense finally found its spark again against the City College defense scoring very efficiently and pulling within three points.

Santa Barbara in a fourth and one yard to go situation, lined up for a risky play call. The decision proved to be the right one, keeping the drive alive and eventually setting up a screen pass from Edwards to Cedric Cooper (No. 9) from 14 yards out. 23-12 City College.

The duo from Seattle, Washington played on different teams in high school, but the Vaquero faithful are glad they are on the same one now, putting City College up eleven with two minutes left in the third quarter.

Both being from the same area, Edwards and Cooper seem to have chemistry, and it’s been on display as of late.

“We have the same locker right next to each other,” said Edwards. “If I throw a bad ball he’ll always come up to me and say ‘shake it off’. Today I tried to make a big block for him.”

Edwards was not done getting his team down inside the 15 yard line. A reverse given to Tyler Higby (No. 22) around the right-side put City College up 18 in the fourth quarter and sealed the deal for the Vaqueros.

Edwards put on a passing clinic in the game going 18 for 26 for 235 yards and three scores through the air. He spread the ball to four different receivers and has carried the Red and Black to a 4 game winning streak, and an undefeated league record at 2-0.

The Vaqueros play their next game after the bye week at 6 p.m. Saturday, Oct. 18 LA Valley.