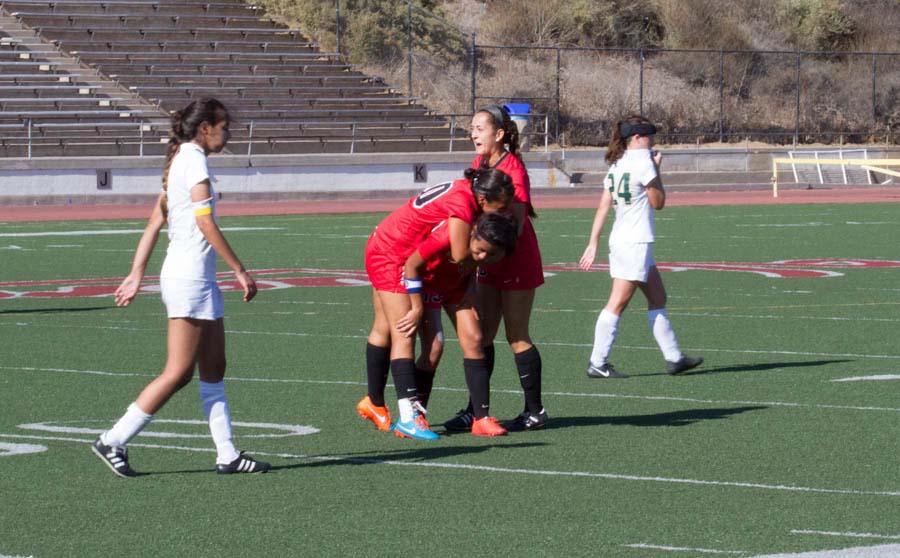 The game was dominated by City College who controlled the ball out shooting LA Valley 26-2 on the day. Neither team could find any breakaway opportunities until Grimaldo found the top left corner from outside the box in the 91st minute to earn the win for City College.

“I saw the clock but I didn’t think about it,” said Grimaldo. “Never give up though right?”

The first half was all City College, which couldn’t seem to find the back of the net despite controlling the ball for most of the first 45’. Head coach John Sisterson saw a lot of opportunities present themselves, but unfortunately could not be capitalized on by his team.

“The girls played well,” said Sisterson. “Just couldn’t find the back of the net till the 91st minute…But we dominated the game from start to finish.”

The 34th minute was when City College’s first surge came after a controversial offside call took an open goal away from Kaitlyn Crooker (No. 8) who beat the goalie on the break away.

Grimaldo made up for the bad luck, and that’s all the Vaqueros needed.

“It gives us a nice boost to win the first conference matchup,” said Sisterson.

That stoppage time goal was a reflection on the deserving win that City College took home after only allowing two shots on goal thanks to the pressure defense and direction of goalkeeper Karin Nordin (No. 0).

“Defenders did their job,” said Grimaldo. “We deserved the win.”

A win against a team with a strong record of 5-1— as LA Valley had before coming to La Playa Stadium— reeks benefits for City College.

“(LA Valley) has a very good win percentage,” said Sisterson. “So we get power points for beating a team like that, which helps us in the Southern California standings.”

The better team on the day ended up victorious, deservingly so. Strong team’s find a way to finish games and that’s the effort that City College displayed at La Playa Stadium Friday.

City College plays their next game at 2 p.m. Tuesday Sept. 30 at Hancock College.