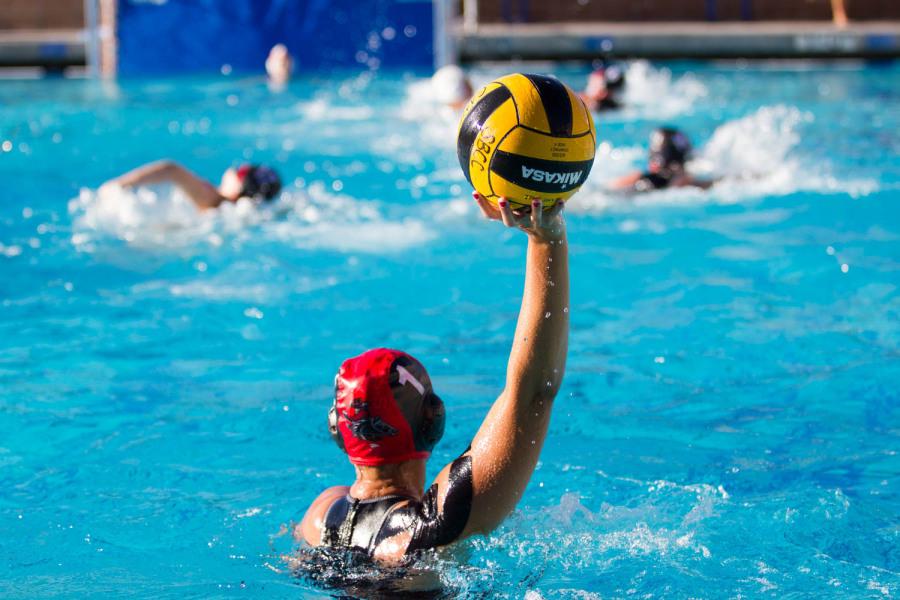 Vaquero's goalie Autumn Lovett (No. 1) throws the ball back to her fellow teammates after a block in the beginning of City College's game against LA Valley Sept. 24, 2014 at San Marcos High School in Santa Barbara, California. The Vaqueros went on to beat the Monarchs 12-10.

City College played its best polo of the season edging off LA Valley with a solid 12-10 win at home much thanks to City College’s Rocio Fesembeck (No. 12) and interim goalkeeper Autumn Lovett (No. 11). Fesembeck scored the first three goals of the game en route to a six goal performance.

Lovett was filling in at goal for an injured Alex Brown (No. 1) and held off the Monarchs to pull out the Vaqueros fourth win of the season.

The Vaqueros showed up early just two minutes into the first with a goal by Fesembeck forcing an early timeout by LA Valley.

Vaqueros were up a player after LA Valley’s Biyouregh Boghozian (No. 3) was forced to sit out after committing a major foul resulting in a 20-second penalty. Fesembeck and the Vaqueros took advantage of the mismatch and scored their second goal of the day.

Swarming defense midway through the first by freshman utility player AJ Gravatt (No. 17) kept LA Valley at bay, reinforcing the pressure on both sides of the ball for City College.

Fesembeck didn’t let up putting another ball into the back of the net for City College with the shot clock winding down. The freshman had her sights on representing the Vaquero red and black well at home along with her teammates.

“I think the school has a high expectation of us,” said Fesembeck. “And to fulfill that is the most amazing feeling ever.”

LA Valley took an aggressive approach late in the first quarter after some encouraging words from head coach Pete Loporchio. The team found its first score with 1:31 left in the first quarter, breaking past a resilient defensive stand by Gravatt and Kaitlyn Wentz Fitzgerald (No. 10).

“This was one of the best games of the season,” said head coach Chuckie Roth. “You can tell they were performing a lot of the things we were working on (in practice).”

LA Valley’s second goal came with six minutes left in the half when they too were up a man after Gravatt was sent to the corner after her major foul. The two teams were battling at this point, and the game became more physical nearing the half.

But Fesembeck took over the match with goals in consecutive minutes, the second off a free throw. But she wasn’t done yet.

A crafty assist by Wentz Fitzgerald to Fesembeck showed off the chemistry of the Black Capped Vaqueros and proved to be deadly with another goal 30-seconds into the third quarter.

But LA Valley came up with back to back goals, displaying its conference championship skill set two minutes into the third.

LA Valley later tied it up with just over two minutes left in the third while Vesembeck was in the corner unable to help spark another offensive attack. Fortunately, that caused Fitzgereald to step up and score thereafter quickly, putting her squad up 8-7.

But when Crysta Thompson (No. 8) set up Fitzgerald with a smooth tip-shot goal, the crowd applauded and sent the home team off with a resilient 12-10 victory.

Great defense and clock management by the Vaqueros sealed the game in the tight match and the coach said he couldn’t be happier with his young team.

“A lot of people were out here supporting the team today. I think that made a big difference,” said Roth. “The girls really wanted to win at home.”

City College plays its next game Friday Sept. 26, at the Mount SAC in the 18th annual Mountie Classic against Cypress College.