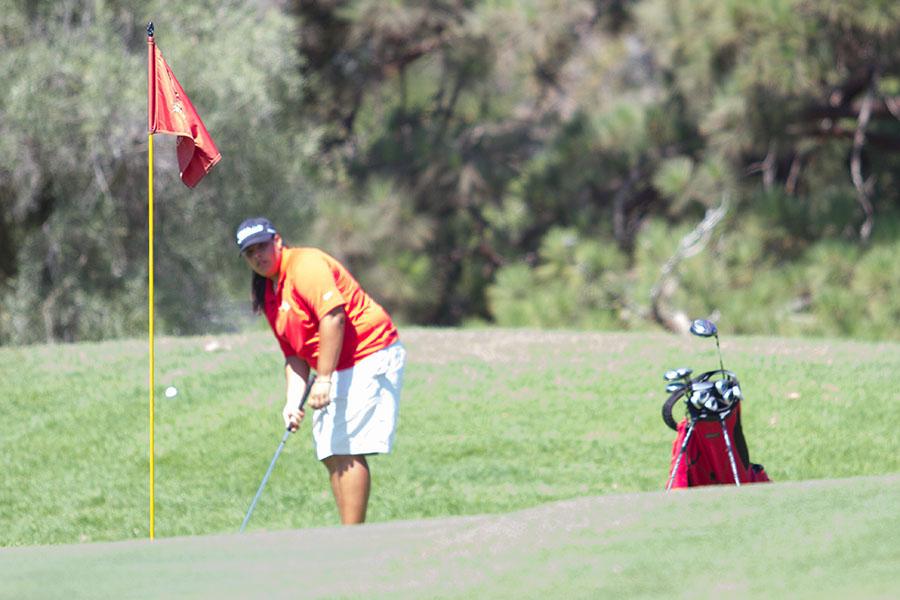 Saralisa Ortega battles the heat in the Western State Conference No. 2 on Monday, Sept. 15, at the Santa Barbara Municipal Golf Course. The Lady Vaqueros finished second to College of the Canyons. 'I didn't play at my best today, I didn't know how to handle the heat, and my putting wasn't on top,' said Ortega.

College of the Canyons won with a final score of 326. City College came up short with a 348, Citrus College shot a 368 for third place, and Bakersfield College placed fourth at 451.

Right before tee off, the players got a few encouraging words from head coach Chuck Melendez.

“Play well, have fun,” Melendez said. “Be proud of your fitness and youth”

The final tallies for the Vaqueros included an 80 by Ortega, 87 by Sara Pettersonn followed by Tiffany Huang with a 90, Laine Johnson , 91, Rebecca Valice , 95, and Colleen Sulivan, 101.

The sun and the heat caused a bit of a trouble for the teams, testing the endurance of the athletes.

Sophomore Saralisa Ortega shot an eight over 80, the best score for the home squad vaqueros. But, the team as a whole fell short and frustrations were high within the home team’s clubhouse after the match.

“I didn’t play at my best today,” said Ortega. “I didn’t know how to handle the heat and my putting wasn’t on top.”

The Vaqueros keep their position in the Conference standings with their score today. Staying in second, City College will need to improve to catch conference leaders Canyons.

“I didn’t see any improvement today and it’s frustrating,” said Melendez. “The energy ran out of the players at the end because of the heat.”