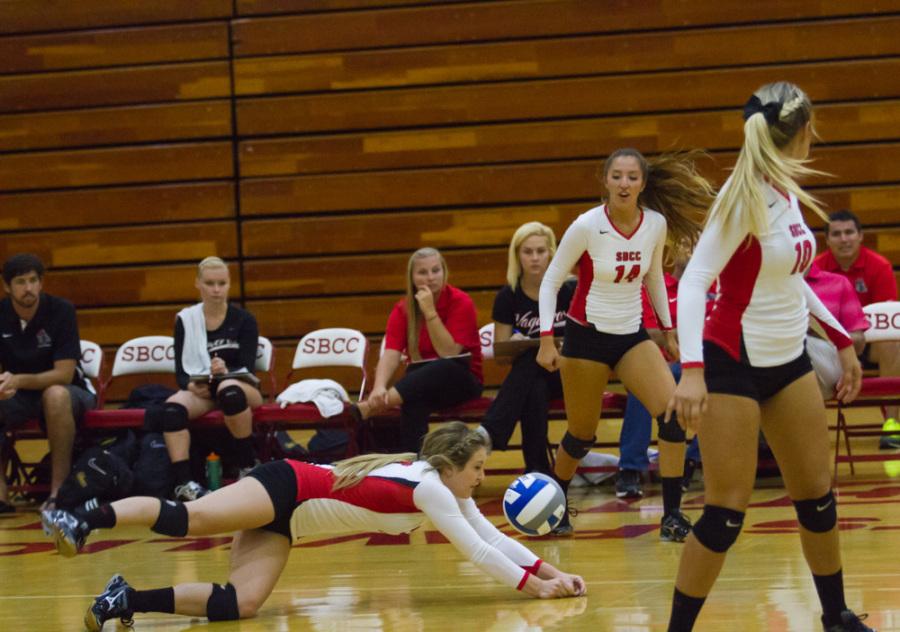 The Vaqueros Right Setter Alissa La Rocca (No. 3) dives for the ball in City College’s first home opener against Cal Lutheran on Sept. 10, 2014. The Vaqueros walked away with an unprecedented 3-0 victory.

The first home match in the Sports Pavilion was a confidence booster for head coach Ed Gover and his team.

“They’re just coming together as a group,” said Gover.

With the help of sophomore setter Madelon Leiphardt (No. 7) and freshman outside hitter Katelynn Womack (No. 18), City College swept Cal Lutheran in strait sets. The Vaqueros have now blanked each of their opponents this season, bringing the streak to nine straight set wins in the last three contests.

“I thought we played like a unit today, very steady,“ said Gover. “Everybody contributed which was nice to see.”

The first set started out shaky for both sides, but the two teams found their confidence quickly. Kills by Womack and sophomore Taylor Badois (No. 9) spearheaded an eight-point streak for the Vaqueros late in the first set, opening up the contest for the home team.

The points were contagious and City College set the tone of the match with a commanding 25-12 win in set one.

The battle came in the second and third sets as Cal Lutheran and City College traded points back and forth. The two teams were starting to heat up and play their best volleyball of the night, competing for definitive final sets.

City College managed to stay ahead most of the game but some breakdowns in communication for the Vaqueros helped the Regals find their feet and a streak late in the second set. City College made up the points and went on to win the set 25-16.

“I think we did really well,” said Womack. “There were some communication errors but nothing super bad. I think overall we worked well as a team and stuck it out.”

Early in the third set Cal Lutheran found some momentum causing City College to rely on its defense. Sophomore’s Leiphardt and Eryn Young (No. 6), along with freshman Tristen Thompson (No. 16) held down the floor with a combined total of 37 digs.

As well as being a key defensive player, Leiphardt dominated the court from her position as setter.

The sophomore Setter is one of only five returners on the team. Womack praised her sophomore teammate on both sides of the ball.

“Her sets are so perfect, every single one gets in,” said Womack. “She is just an all around good player. She has really good defense, which helps a lot.”

In the end, Cal Lutheran stood no chance against the strong City College offense and fell 25-17 in the final set.

For any team, but especially a young one, starting the season 3-0 is an exciting beginning to the year.

“It was a good start to the season,” said Gover. “It builds their confidence, especially the freshman. Winning at home for your first home match is pretty big.”

The Vaqueros take on Grossmont College at 1 p.m. on Saturday, Sept. 13 at L.A. Pierce in Woodland Hills.