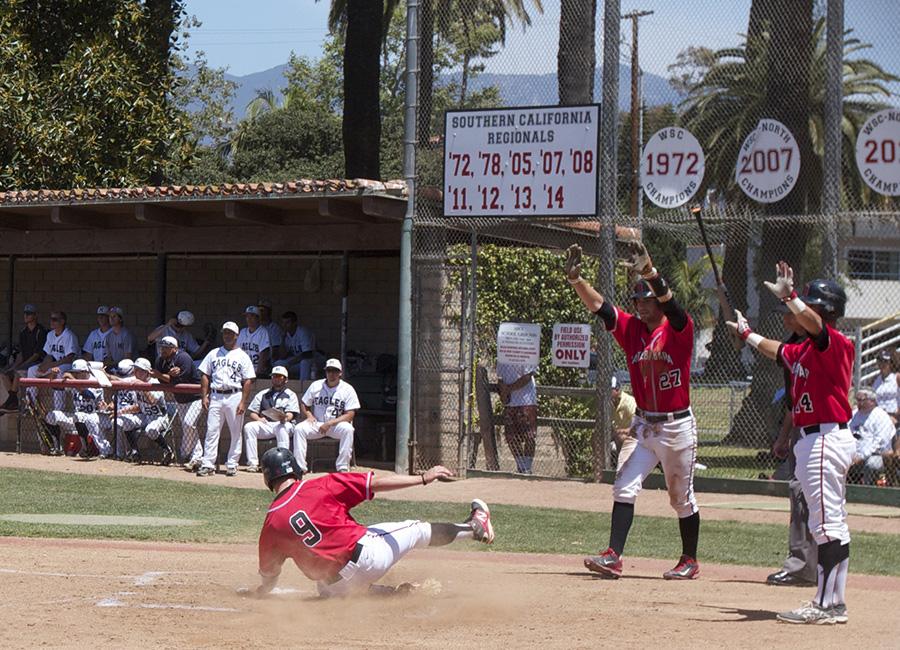 Jimmy Brakka (No. 9) slides in safely to home as Patrick O’Brien (No. 27) and Brandon Evans (No. 14) wait to congratulate him, Saturday May 10, at Pershing Park. The Vaqueros’ 8-1 win against LA Mission in game two of the best-of-three series advances them to the Sectionals round for the first time in program history.

City College baseball got another good pitching performance Saturday, May 10, and beat LA Mission College 8-1 at Pershing Park to move on to Sectionals for the first time in program history.

The Vaqueros (27-13) picked up right where they left off after shutting out the Eagles on Friday in game one of the Super Regional matchup. Solid pitching, consistent defense and timely hitting have punched the Vaqueros’ ticket to the final four of Southern California. Pitching dominated the weekend as the Vaqueros only allowed one run to score in 18 innings.

Tyler Gilbert (No. 12) pitched seven innings of shutout baseball for the Vaqueros, striking out seven batters and scattering five hits. The USC-bound lefthander used a steady dosage of fastballs and split–finger change ups to keep the Eagles’ offense at bay.

“He won the strike throwing contest which set the tone from early on,” head coach Jeff Walker said. “He gave us the championship effort that we needed.”

The offense for the Vaqueros got to LA Mission’s starter Aaron Hamilton in the second inning, capitalizing on walks and an error by the third baseman. Matt Gimenez (No. 13) had the big hit of the inning; a bases loaded double to left center that brought Jimmy Brakka (No. 9) and Patrick O’Brien (No. 27) around to score.

Back-to-back sacrifice flies by Spencer Erdman (No. 5) and Brandon Evans (No. 14) put two more runs on the board and the visiting Vaqueros (host team is always visitor in the second game of three game series) were up, 4-0.

In the three innings that the Vaqueros did score, the first batter reached by either walk or hit-by-pitch. Gilbert and Lucas Benenati (No. 20), who pitched the final two innings, didn’t give up any free bases.

Gilbert saved his best game of the season for perhaps his last start at Pershing Park. He didn’t pitch for three weeks as he was shut down to let his recover and

“It’s great (to pitch at Pershing Park),” Gilbert said chuckling. “This place is a cool environment- you’ve got everything from palm trees to homeless people. The crowd is awesome.”

Hill, hitting out of the seventh spot as the designated hitter, had a two-out single in the third inning that brought Connor McManigal (No. 24) around to score from third. O’Brien was thrown out at home for the final out of the inning.

Up five runs after three innings, Gilbert took over and never faced more than four batters in an inning from that point forward.

The bottom of the third ended when Eagles’ left fielder Brandon Ortiz hit a sharp line drive to right field but was thrown out by Noeh Martinez (No. 26) on a close play at first.   The Vaqueros dugout erupted as the umpire made his call and the team was charged up.

Hill came up again in the sixth inning and doubled to right center field, scoring Brakka from first who was running on the pitch. Hill came around to score later when he barreled into home, knocking the ball out of the pitcher’s (who was covering the plate) glove. He reached base four out of five times he came to the plate, scored two runs and drove in two.

“All I know is just to play one brand of baseball and that is 110 percent,” Hill said. “I try and play hard nose baseball and let the baseball God’s take care of the rest.”

Benenati came on in relief of Gilbert in the eighth and closed out the game, striking out three batters and allowing one run to score on a questionable call on a ball hit down the line in the ninth.