City College football tunes up and tones up for season opener 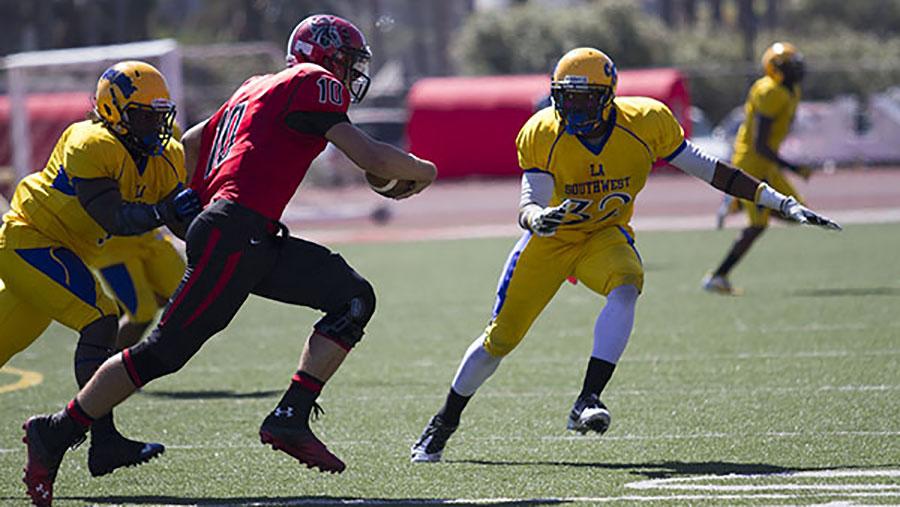 Vaqueros quarterback Joshua Martin (No.10) runs the ball past LA Southwest linebacker Tim Lucious (No. 32) for a small gain in the October 5, conference matchup at La Playa Stadium in Santa Barbara. Martin finished with six total touchdowns en route to a 44-7 victory.

Despite coming off the team’s best season in 22 years, the Vaqueros football program feels there is unfinished business that needs addressing going into 2014.

The 2013 season opened on a high note yet closed on somewhat of a somber one as injuries would take a toll on the team and turn a 6-0 start into a 7-3 overall record.  Going into the summer before the 2014 season, confidence for the team is at an all-time high.

“Our biggest goal this year is to go 11-0 with a bowl game win,” said returning defensive back Zach Arnell.

“The main focus is to finish every rep at 110 percent no matter what the situation is. We love the adversity because that means we all are in it together to get that W, even if it means we need to make a few unexpected adjustments.”

However with adversity, comes the emotion aspect — an aspect the Vaqueros focus on being in control of while on the field.

“We also focus on discipline and making sure we play with class,” Arnell continued. “If you make a big play, get up and do it again without saying anything or causing confrontation.”

Even with the high expectations going into the summer, the team knows it can’t afford to rely too much on the previous season’s success. Many of the players who were such a huge part of the team last year, defense especially, have moved on.

Two of last season’s key defensive players have moved on to Division 1 schools.  Linebacker Morgan Nevin (Sacramento State) led  California in tackles per game with nearly 16.  Defensive back Tavonte Jackson (Idaho State) was second in the conference in interceptions and first in pass breakups.

Only five starters from last year’s defense that led the state in tackles will be returning in 2014, Arnell being on of them.  He is embracing the leadership role as the team looks to the summer.

“We will be key components to making sure our defense will make the offense get the most chances to put points up on the board.”

Although his focus remains mainly on the secondary, Arnell believes that the front seven will flourish next season as well.

“Our defensive line is going to play a huge role for us this season by forcing the pass and stopping the run and our linebackers are extremely talented,” Arnell said.

Returning linebacker Jake Pettit and second team All Conference Defensive lineman, Travis Butts, will be in charge of helping the newcomers fit in to their respective positions on defense.

“We have great receivers, running backs, and o-line with some intelligent QBs that know how to pick apart defenses,” Arnell said.

Arnell also stresses that with the team’s use of the no huddle or “hurry up” offense, a huge focus of the Vaquero players will be “getting in as best shape as possible to perfect it.”

With the arrival of new players coming in the offseason, Arnell and the rest of the returning players see it as helpful competition for the team.

“Since we went 6-0 last year our head coach, Craig Moropoulos, always tells us to finish what we have started and that’s to get that undefeated season,” said Arnell.

In an interview with Sports Information Specialist, Dave Loveton, Coach Moropoulos would share his thoughts on the upcoming season.

“Things are going well (in spring practice) and we’re excited about some of the guys we’ve got out there,” said Moropoulos. “The next phase will be June, where we’ll have another influx of recruits coming in. We’re excited about the possibility of a nice upgrade.”

“We have serious potential to accomplish that 11-0 season and I believe in every single one of us,” said Arnell. “We love all the support we can get, so have everyone come out and watch what the Vaquero football team can do!”

The Vaqueros will host the season opener against San Bernardino Valley College at 4 p.m. on September 6, at La Playa Stadium.