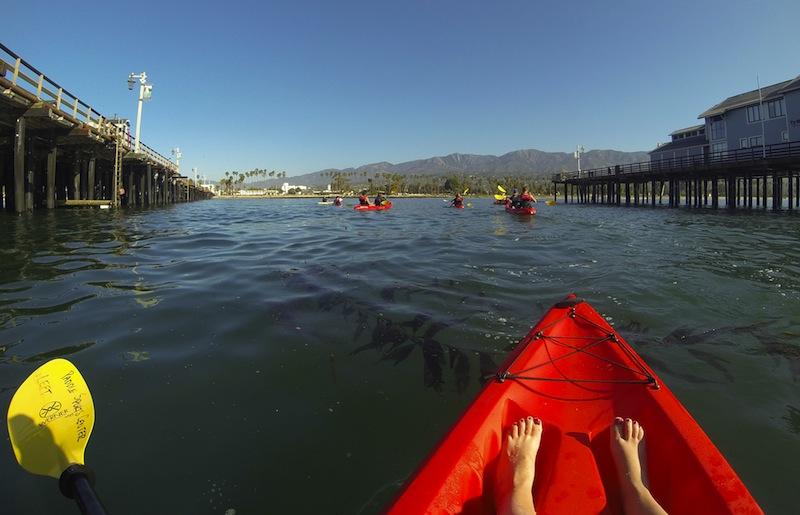 The City College Kayakers paddle underneath Stearns Wharf, Thursday, April 24, in Santa Barbara. The Kayaking class meets Tuesdays and Thursdays from 8:00 to 10:00 am to paddle out on the ocean.

Its 7 a.m. and your hand can’t make it to the alarm clock before the voices in your head tell you it’s too early, too dark, and too cozy to get out of bed.

But for one group of students, that alarm sound can’t come soon enough.

The Ocean Kayaking class offered at City College is different from the rest of the 8 a.m. classes you can sign up for. Introduced eight years ago by class instructor John Sisterson, it’s always been full, and always been fun.

“My friends back home can’t believe me when I tell them I ocean kayak for school credit,” City College student Devin Geis said. Geis, an Environmental Studies major, agrees that this class fits him perfectly.

Apart from the whale watching and seal confrontation that occurs in the class, Sisterson has a very colorful life. Not only is he the head coach for both the men and women’s soccer teams, Sisterson has coached on the biggest stages the sport has to offer.

Coming to the States in 1997, Sisterson was head coach of the women’s Deaf Olympic Soccer team, which won gold in Melbourne, Australia in 2005, and again in ’09 in Thailand. But Sisterson wasn’t on the sideline for the last title. He prepared the team, helped pick the players, but was too busy on the west coast with his demanding occupation.

“With the commitment here to the college coaching two teams then, I just couldn’t coach the Deaf team in August,” he said.

A busy man, Sisterson never fails to have energy for this unique class. Writing and proposing the idea in 2006, he didn’t have to teach, but he wanted to.

“Some of (the students) had never been out on the water,” said Sisterson. “So it’s nice to help them become aware (of the ocean).”

With the high population of foreign students at City College, Sisterson himself is from England, it’s a unique experience for all parties involved.

“It’s a diversified class with diversified backgrounds, and it’s nice for me to get out of the stadium.” Sisterson said with a grin.

Swedish student Viktor Petersson took advantage of the class moving here from Stockholm. He hadn’t heard of the class prior to moving, but he scrambled to grab a spot in the reputable class once it became available to him.

“We don’t have the same options (in Sweden) as here,” said Petersson. “It’s always beautiful weather here, and you can actually kayak because it’s a big thing here culturally too.”

Sisterson isn’t the only one who helps the program stay afloat. City College alum Fraser Kersey is one of the owners of Paddle Sports Center. Located conveniently across from the City College in the harbor, Kersey is very generous to the program and provides the kayaks for the class for a minimal charge.

“It’s just kind of something we give back to the community,” said Kersey.

The Center has a great selection of water equipment and opens its doors for the students just before the class gathers.

“It’s a great introduction to kayaking in general,” said Kersey. “It’s great because it obviously gives exposure to what we’re doing. Our goal is to get people out on the water and to kind of educate them on different types of issues about the ocean. It gets the ball rolling.”

One of the more peaceful and satisfying classes, the class isn’t all games. Sisterson teaches the class the correct way to flip the kayaks, paddle, and rescue a fallen kayaker from the water with speed and safety.

Preparing the students with a lifelong skillset of open water kayaking safety is one of the more rewarding parts of the class for Sisterson, and it keeps him going. Eight years into the class, Sisterson enjoys each year as much as the previous, and hopes to keep this class full each spring.