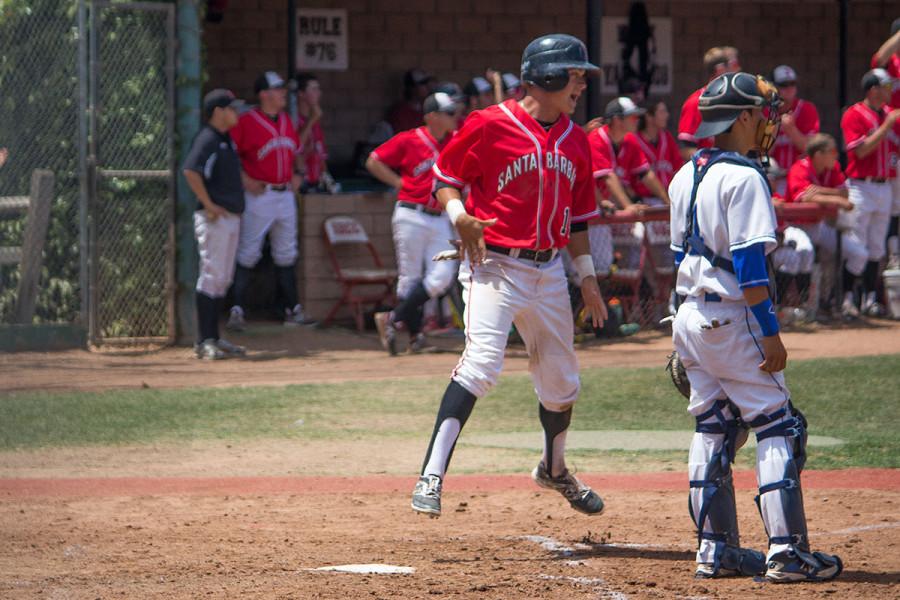 City College's freshman outfielder, Brandon Evans (No. 14), celebrates earning a run after Patrick O'Brien's double during the fourth inning on Saturday, May 3, at Pershing Park in Santa Barbara. The Vaqueros defeated the San Bernardino Valley College Wolverines 8-2, advancing to the second round of the 2014 CCCAA Baseball Southern California Regional for the second time in school history.

Tempers flared at Pershing Park on Saturday as City College knocked off San Bernardino Valley winning game two of the three game series and moving on to the So Cal Super Regional.

For the second time in school history, the Vaqueros will be able to write their name into the Super-Regional bracket line advancing past a fired up San Bernardino team and fan base. Three ejections were issued to the Wolverines, two being players and one parent.

“You can’t react (that way) to what’s going on,” said head coach Jeff Walker. “I think that’s maybe where they ran into a little bit of trouble. They were reacting to the energy coming from our dugout.”

City College was competing as the visiting team on their home field due to the three game series situation, trying to avoid a double header (with a loss).

In the second inning City College’s lefty Tyler Gilbert (No. 12) was back on the mound after not throwing for three weeks to mend a sore left forearm. Gilbert and the Vaqueros were down a run in the first inning with a leadoff double by Valley’s Jason Wilcoxon, who was later knocked in by a sacrifice from AJ David.

The Vaqueros found life in the top of the third inning when second team all-conference left fielder Conner McManigal (No. 24) drove in Brandon Evans (No. 14) to tie it up.  Future UCSB Gaucho Patrick O’Brien (No. 27), was up with the bases loaded and was hit by the pitch forcing Noeh Martinez (No. 26) across home plate. City College had their first lead, 2-1.

The game was broken open the next at bat when James Brakka (No. 9) hit a hard grounder to second base, taking a bad hop off the dirt and got to the outfield. O’Brien came all the way around from first to score and Brakka cleared the bags giving the Vaqueros some insurance up 5-1.

“I was just trying to put the ball in play,” said Brakka. “Turns out, the Persh gave back.”

Next inning, O’Brian came up big again for City College this time smashing a two run double over the left fielders head, getting the dugout loud again, up six.

Gilbert (5-4) sat down the last six batters he faced and ended the game striking out seven and only walking one Wolverine. The three weeks off seemed to help Gilbert recover, who hadn’t seen a win since February 20.

“It actually benefitted me a lot not throwing for those weeks,” said Gilbert. “It felt good just to be back.”

City College improves to 17-3 at home and they are comfortable at “The Persh.” So comfortable in fact, Walker’s squad takes parts of their home field with them on away games.

“We’ll bring palm fronds, alligator eggs, (and) ocean water. We took a picture of the mountains too,” said Brakka. “We’ll bring the Persh with us wherever we go.”

Walker keeps a cool mindset when talking about moving forward. He wants to keep it loose with his team, and just enjoy the game of baseball.

City College will face off against LA Mission beginning at 2 p.m. on Friday, May 9, at Pershing Park.  This is only the second time City College has made it to the Super Regionals and the first time in program history it is hosting.