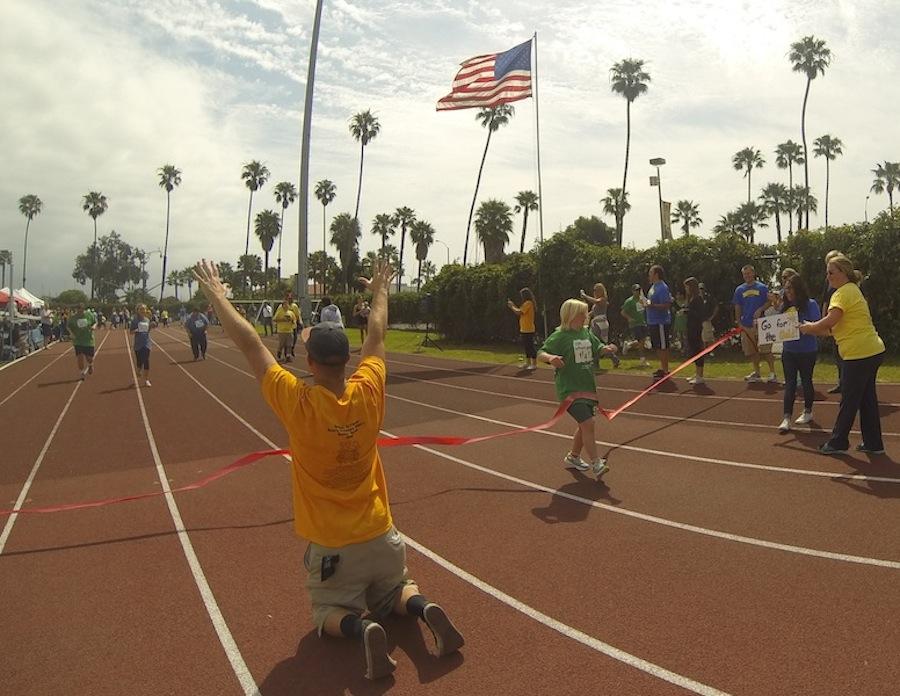 Allison Hoerf from Santa Barbara High crosses the finish line of the 50-meter run as Cameron Stewart cheers on the rest of the field Friday, April 25, at La Playa Stadium in Santa Barbara. The sixth annual Special Olympics Southern California School Games had more than 250 athletes from 26 schools in the Santa Barbara area.

Some athletes take for granted their ability to even make it on the field everyday.

For the athletes that took to the track at La Playa Stadium, Friday, April 22, this was their one chance a year to get out and compete in various track and field events.

The Sixth Annual School Games, put on by Special Olympics Southern California, hosted more than 250 students from 26 schools from Carpinteria to Santa Ynez. The ages, elementary to high school, may have varied for the athletes but the heart, determination and support for one another was the same.

“For a lot of students its their first chance, maybe their only chance, to represent their schools in a competition,” said Tim Philibosian, regional sports manager for Special Olympics Southern California. “They get to wear their school colors and race against other schools and athletes and get out and participate in athletic competition.”

The event was the culmination of six months of hard work by volunteers and people wanting to make the athletes have their time in the athletic spotlight.

Michelle Duke, a graduate from UCSB in 2012, started volunteering at the non-profit event two years ago and is now a full time staff member for Special Olympics Southern California. Now the Special Events and Volunteer Manager, she along with one other staff member from SOSC, was in charge of getting the event coordinated.

“We spend countless hours doing this but once we get here it is a complete relief to see the students and how happy they get competing, it makes all those long nights worth it,” Duke said.

All of the athletes paraded around the track in their school’s colors prior to kicking off the events to the applause and cheer of the volunteers, families and friends in the stands.

Over 180 volunteers took to the turf at La Playa to assist and encourage all of the participants in the various track and field events. One of those volunteers, Jerry Siegel, has been involved in the School Games every year and is now a member of the leadership council for SOSC.

“I got involved seven or eight years ago when I was coaching Special Olympics soccer here in Santa Barbara. A big credit to you guys (City College), for making the track available and making this happen,” Siegel said.

From the 30-meter wheelchair slalom to the tennis ball throw, athletes gave it their all in multiple events throughout the day. All of the participants received ribbons from local law enforcement for their efforts and got to stand on a podium and have their picture taken.

“It’s a beautiful day. I’ve been doing this for so long I’m seeing kids that I knew in when they were in kindergarten and now they’re in high school,” said Goleta Valley Junior High School instructional assistant, Cameron Stewart. “To see them build their social skills and their physical ability is what this is all about.”

The participants made their way through a volunteer-made tunnel in the middle of the field that ended a special day for all involved.

Those who are interested in volunteering or helping out with Special Olympics Southern California can visit http://sosc.org/santabarbara.