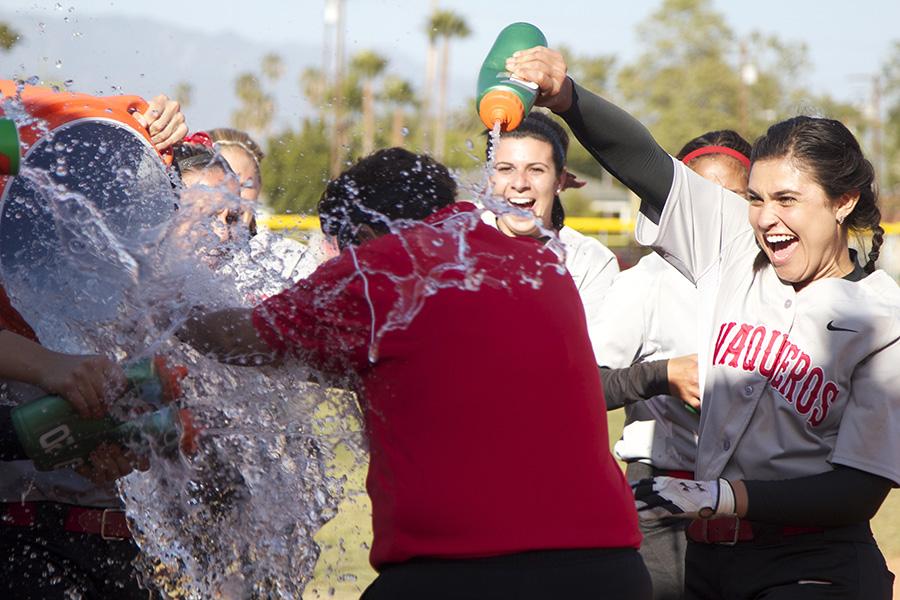 The team celebrates the victory by showering head coach Paula Congleton with water after winning both games against Moorpark College on Tuesday, April 22, at Pershing Park. The Vaqueros won, 6-2 and 7-0, and finished the regular season with an overall record of 22-14.

Twelve City College softball players lined up to play what could be their final games of their careers against Moorpark College on April 22 at Pershing Park.

“I just wanted to come to the game and perform my best,” Cen said, fighting back tears. “I saw the ball really well (today).”

Acosta pitched both games for the Vaqueros, striking out 19 batters, scattering seven hits and didn’t allow an earned run. Cen battled through an injury suffered in the first game and went 5-6 at the plate and knocked in five runs.

The team kept its slim playoff hopes alive and will wait to see if they are given an at-large birth into the playoffs.

Chrystal Vierra (No. 17) came up big for the Vaqueros with two runners on and lined a single to left field scoring Victoria Lucido (No. 5), advancing to second base on the throw home. Two pitches later, a passed ball scored Danielle de Castro (No. 19) and City College was up two runs with its first lead of the ball game.

Amanda Caras (No. 22) added to the lead with an RBI single to left scoring Vierra. The hits kept coming as Dakota Wilcox (No. 10) singled and Alex Abbott (No. 14) came up behind her and hit Brianna Portese (No. 7) in with a single to center. The Vaqueros scored five runs on six hits and had a four-run lead going into the sixth inning.

Acosta closed out the seventh inning and secured game one of the double header with a final score, 6-2. Acosta struck out 12 batters in the win only giving up three hits.

Mid-way through game two City College went up in the third inning when Lucido singled and a fielding error got her to second with Cen up to bat. Cen did what she has been doing all year and knocked in Lucido on a single up the middle and advancing to second on the throw. Two pitches later Cen stole third and then was knocked in by Vierra, giving City College a two-run lead.

Moorpark was threatening in the top of the fifth inning loading the bases with only one out. A fly ball to Lucido in right was caught and fired to the plate to double-up Moorpark’s Alex Robles to end the inning.

In the bottom of the fifth, Shannon Kelly (No. 18) and Paige Harley (No. 11) singled back to back to start off the inning. Cen came up with the bases loaded after a walk to Nicole Bennett (No. 21) and scored Kelly, extending the lead to six.

Portese caught a line drive in the last inning and then fired to first to double-up the runner to end the game.

“It was a really great way to end our home series,” Congleton said. “We hit, and just kept hitting the ball.”

With 12 players leaving, Vierra is one of two players set to return to Pershing Park next season.

“It’s going to be a lot different (next season),” said Vierra, who is third on the team with a .309 batting average.

City College will wait to hear about its fate early next week.