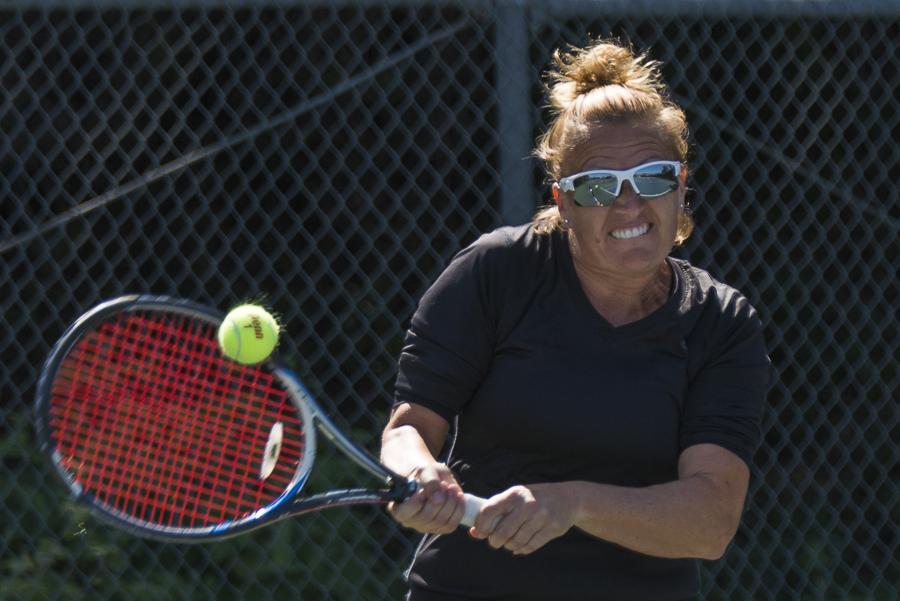 There is much more behind the impressive record Vaqueros tennis player Teresa Downey than a stat sheet will show. Behind those sunglasses and cool court demeanor, is a woman on a mission.

Downey, a mother of two, has known tennis would be a big part of her life since she was very young.

“I have played tennis since I was eight-years-old,” Downey said. “I’m from a tennis family.”

Now 46, her love for the game is as strong as ever.

“I’m not the youngest on the tennis court anymore, but I’m one of the most competitive,” Downey said.  “Having three older brothers will do that to you.”

The idea to play tennis at City College wasn’t always there for Downey, as she had other things to focus on in life.

“My husband had a job promotion that brought us to the Central Coast and this is where I have started the second chapter in my life,” she said.

After working in property management in San Diego for 20 years, Downey decided to leave her job for new opportunities. With her eyes set on returning to school and starting a new career, Downey chose to go to City College and join the tennis team.

“My husband and I have always tried to show our children that you never know unless you try,” said Downey. “And that’s what I am doing at SBCC.”

Since joining the team this year, Downey has compiled a remarkable 10-2 record in singles from the number one spot on her team. However, despite all the personal achievements, Downey’s focus remains with the team as a whole.

“We are all new to the college tennis scene, so I think we have really done well at being a team, supporting each other and with each match we are getting better all the time.”

When talking about successful team development, Downey stresses the importance of having a helpful coach.

“(Coach) Lance (Kronberg) is a great coach and is really making a difference in our games. Learning how to be more flexible and change my game has been a challenge but Lance has really helped me to start thinking more on the court.”

Praise from her teammates is never lacking, as Downey’s doubles partner, Monica Kunz, really enjoys playing alongside her.

“Although her nickname is “killer,” it is nothing like who she is outside of competition,” Kunz said. “Teresa is a very supportive teammate.  She is strong and instinctive and I am proud to call her my doubles partner.”

Along with the joy tennis brings Downey, comes pain, as it is reminder of a part of her past she will never forget.

“Tennis is not just a sport for me,” said Downey. “It stopped being just a sport when I was 22-years-old, when my older brother and doubles partner, Bradley, passed away.”

Now that her own love for tennis is back in her life, Downey intends on keeping it that way.

“Over the years, his love for tennis has gotten back to me, though it just took awhile,” she said. “Tennis is always in my life.”

“I will always have a tennis match somewhere. Whether it is college, tournaments, league or just getting out on a weekend with my tennis friends at Soto Park in Arroyo Grande.”

While playing tennis remains a sure thing for Downey, other plans for her future remain undecided.

“I just can’t say at this point where I am going,” she said. “I plan on graduating this year and can’t wait to see where life leads me.”

“I have had every emotion possible over the years on the tennis court, but now, I just really enjoy being out there and being able to play the sport. I’m healthy, live in the beautiful Central Coast, and have a wonderful family who supports me.”