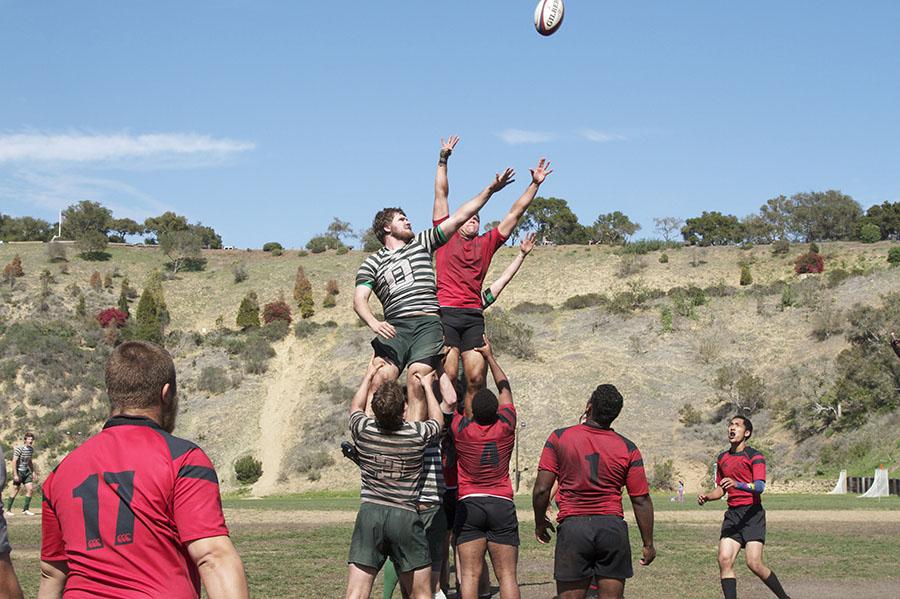 The Academy, now in its fifth year, comprises of City College students although the name does not reflect this.  The Division 1-AA squad competes against major four-year universities throughout the country.

Coming off a tough home loss to Cal State Fullerton on Saturday, March 15, the squad rebounded against Dartmouth and rallied in the second half to put the match out of reach.

“That was probably one of our better performances,” said team captain Sean Gorman.  “We’ve been struggling a little bit and it was great to see everyone moving the ball and knowing what we wanted to do.”

Mahlik Brewster-Blake (No. 4) kicked off the scoring for Santa Barbara early in the first few minutes of play, scoring a try on the squad’s first possession. Gorman (No. 8) made the conversion and Santa Barbara was quickly up, 7-0.

Dartmouth, located in Hanover, New Hampshire, stormed back and found itself ahead, 12-7, with 20 minutes remaining in the first of two 40-minute halves.

Justin Ruta (No. 7) from Staten Island, New York, scored a try for Santa Barbara and after another conversion by Gorman the SBRA led, 14-12.  Santa Barbara was able to extend its lead going into half after Ben Robinson (No. 6) scored two trys back-to-back, minutes before halftime.

Halftime was the end of the match for Robinson, however, as the freshman from Sydney, Australia, had to head back to campus for a midterm exam.

“Two trys, I’m happy with that,” said Robinson as he exited the field.  “I don’t know where anything here [United States] is but hopefully we can beat them.”

Dartmouth, founded in 1769 and 54 years older than the sport of rugby itself, is in the midst of a West Coast swing having played at Cal Berkley and Cal Poly San Luis Obispo earlier in the week.  The substitutes seemed quite content sitting on the bleachers in the 70-degree sun as the weather in Hanover failed to make it out of the high 30’s.

The heat and having played two matches already in the week seemed to catch up with Dartmouth in the second half as they were only able to put five points on the board in the remaining 40 minutes.

Santa Barbara took advantage of its opponent’s fatigue and a big second half by Pepe Semeraro (No. 20) put the match out of the reach and cruised to a 48-22 victory.

“I was very pleased with the guys,” Head Coach Kevin Battle said.  “Dartmouth is a quality, quality team and we played very well today.”

After the match both bloody, sweaty teams locked arms in the center of the field in an act of fellowship and sportsmanship unlike any other sport because, “without them we have no game.”

“One of the great things about the sport is the comradery that is shared amongst the players,” Battle said.  “The competitors out their want to absolutely want to murder each other but after the game it’s nothing but mutual respect and admiration for your opponent.”

Santa Barbara wraps up its season on Saturday, April 5, with a chance to make it to playoffs as they travel south to play UCSD.